Die Entführung aus dem Serail (in English: The Abduction from the Seraglio) is an opera with music by Wolfgang Amadeus Mozart. It is an example of a Singspiel: a type of German opera which had spoken dialogue as well as singing, and was often about magical stories. Mozart's opera The Magic Flute is also a Singspiel.

The German libretto is by Christoph Friedrich Bretzner and was changed a bit, without Bretzner’s permission, by Gottlieb Stephanie. The story is about the hero Belmonte, helped by his servant Pedrillo, who tries to rescue his beloved Konstanze from the seraglio (palace) of the Pasha Selim.

The opera was first performed by the Nationalsingspiel ("national Singspiel") which was sponsored by the Austrian emperor Joseph II. Mozart arrived in Vienna in 1781 and was looking for an opportunity to get a commission for an opera. He showed one his operas (Zaide) to the manager of the Nationalsingspiel. He was impressed and asked Mozart to write an opera for the company.

The work is lighthearted and meant to be funny. Some of the characters in the story are Turkish. Turkish stories and music were very popular at that time in Europe, and Mozart writes some Turkish music (or what Europeans thought was Turkish music) in this opera. Some of the arias are very difficult to sing, especially the long "Martern aller Arten" ("Tortures of all kinds") sung by Konstanze, which is like a concerto movement. She is accompanied in this aria by an orchestra and four solo instruments.

The opera was a huge success and earned Mozart a good sum of money. However, he was not paid properly for later performances, so it did not make him rich.

When Joseph II heard it he said to Mozart that there were “too many notes”, to which Mozart replied: “There are just as many notes as there should be”. 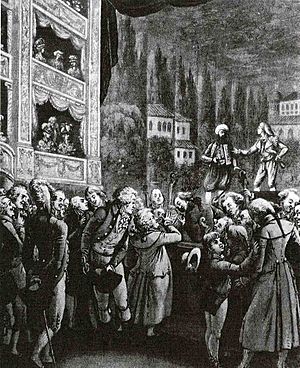 The singers perform with a Classical orchestra, to which are added instruments needed for "Turkish" music: bass drum, cymbals, triangle, and piccolo. The main orchestra has pairs of flutes, oboes, clarinets, bassoons, horns, trumpets, a set of two timpani, and strings. In the aria, "Sorrow has become my lot", there is also a basset horn.

Konstanze, and her English servant Blondchen have been captured by pirates who sold them to the Turk, Pasha Selim. Belmonte goes to rescue her. Osmin, the Pasha's servant, comes to pluck figs in the garden and takes no notice of Belmonte who tries to get news about his servant, Pedrillo. Osmin is angry. After he leaves, Belmonte meets Pedrillo and they decide to rescue Konstanze.

Selim appears with Konstanze. He wants her to love her, but she doesn’t. Pedrillo suggests to the Pasha that he should employ Belmonte as builder, but Osmin does not let him come into the palace. 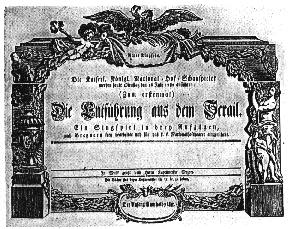 Osmin tries roughly to make love to Blondchen. After a duet Osmin departs. Konstanze greets Blondchen in distress and tells her that Selim wants her love and is threatening to use force.

When she has gone, Pedrillo comes to Blondchen, who is his sweetheart, and tells her that Belmonte is near and plans are ready for a rescue attempt. Blondchen is very happy. Pedrillo invites Osmin to drink. Osmin gets drunk and Belmonte gets him out of the way so that Belmonte again sees his beloved Konstanze.

Belmonte and Pedrillo come to the garden with ladders. Belmonte manages to snatch Konstanze away, but when Pedrillo is about to escape with Blondchen, they are caught by Osmin, and Belmonte and Konstanze are also brought back by the guard. Belmonte asks the Pasha not to kill them. He says that his father is a rich Spanish governor who will pay a lot of money so that they are freed. Selim Pasha says to Belmonte that he is the son of his greatest enemy, so he is delighted to have caught him. However, the Pasha then becomes kind and decides to forgive them and set them free. Osmin is not happy about this. He would have loved to see them executed.

All content from Kiddle encyclopedia articles (including the article images and facts) can be freely used under Attribution-ShareAlike license, unless stated otherwise. Cite this article:
Die Entführung aus dem Serail Facts for Kids. Kiddle Encyclopedia.