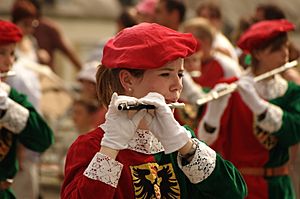 A piccolo being played

Historically, the piccolo had no keys, and should not be confused with the fife, which traditionally was one-piece, had a smaller bore and produced a more strident sound.

The Swiss piccolo is used in conjunction with marching drums in traditional formations at the Carnival of Basel, Switzerland.

It is a myth that one of the earliest pieces to use the piccolo was Ludwig van Beethoven's Symphony No. 5 in C Minor, premiered in December 1808. Although neither Joseph Haydn nor Wolfgang Amadeus Mozart used it in their symphonies, some of their contemporaries did, including Franz Anton Hoffmeister, Franz Xaver Süssmayr and Michael Haydn. Also, Mozart used the piccolo in his opera Idomeneo. Opera orchestras in Paris sometimes included small transverse flutes at the octave as early as 1735 as existing scores by Jean-Philippe Rameau show.

Although once made of wood, glass or ivory, piccolos today are made from plastic, resin, brass, nickel silver, silver, and a variety of hardwoods, most commonly grenadilla. Finely made piccolos are often available with a variety of options similar to the flute, such as the split-E mechanism. Most piccolos have a conical body with a cylindrical head, which is like the Baroque flute and later flutes before the popularization of the Boehm bore used in modern flutes. Unlike other woodwind instruments, in most wooden piccolos, the tenon joint that connects the head to the body has two interference fit points that surround both the cork and metal side of the piccolo body joint.

All content from Kiddle encyclopedia articles (including the article images and facts) can be freely used under Attribution-ShareAlike license, unless stated otherwise. Cite this article:
Piccolo Facts for Kids. Kiddle Encyclopedia.