The bass flute is the tenor member of the flute family. It is in the key of C, pitched one octave below the concert flute. Because of the length of its tube (approximately 146 cm (57 in)), it is usually made with a J-shaped head joint, which brings the embouchure hole within reach of the player. It is usually only used in flute choirs, as it is easily drowned out by other instruments of comparable register, such as the clarinet.

Kotato and Fukushima produce an instrument that they call bass flute in F, which some people refer to as a Contra-alto flute.

Prior to the mid-20th century, the term "bass flute" was sometimes used, especially in Great Britain, to refer to the alto flute instead (for example: the part for "bass flute in G" in Gustav Holst's The Planets). In 1910 Abelardo Albisi invented a bass flute known as the albisiphone which was used in scores by Mascagni and Zandonai among other composers during the first half of the 20th century.

The instrument's sounding range is from C3, one octave below middle C, to C6, two octaves above middle C. Bass flute music sounds an octave lower than it is written, which is the typical concert flute range (C4 to C7). Notes written above A6 are not often used as they are difficult to produce and have inferior tone. Because manufacturers do not taper the flute body through the curve, intonation of all notes beginning with written D6 and higher tend to be sharp. The player can bend them in tune through blowing technique or use alternative fingerings.

Bass flutes often have a C foot rather than the B foot common to other flutes. The shorter tube reduces acoustic resistance, which quickens the response and makes the tone brighter, livelier, and more resonant. The shorter tube also makes the instrument somewhat lighter and less fatiguing for the player to hold.

Bass flutes are most often made with silver-plated bodies and head joints. Most basses come with trill keys which allow the player to stabilize some otherwise unstable middle register notes as well as trill between otherwise impossible notes. Kotato basses have addressed the weight problem of bass flutes by designing a graphite rod that screws onto the underside of the instrument and then rests on the chair seat between the player's legs. Adjustable rods have also been developed by Jeff Amos. Other manufacturers have added a left hand thumb support called a crutch, which helps some players with physical control of the instrument. Dutch flute maker Eva Kingma has created a vertical design for the bass flute which allows the weight of the instrument to be supported by the floor. 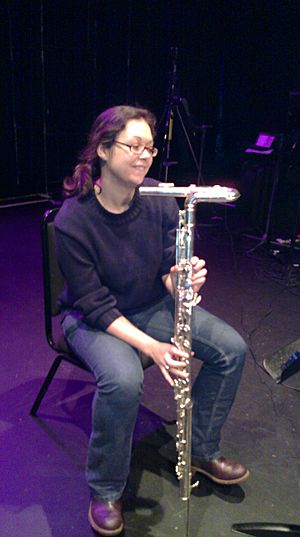 An upright bass flute being played by Carla Rees

For an extensive list of repertoire for bass flute and contrabass flute see Repertoire Catalogue for Piccolo, Alto Flute and Bass Flute (2004) by Peter van Munster (Roma: Riverberi Sonori). Selected repertoire graded into ability levels with short descriptions and information about basses can be found in The Alto and Bass Flute Resource Guide published by Falls House Press, and specialist low flutes publishing company Tetractys has a growing catalogue of works for bass flute.

A handful of jazz musicians have used the bass flute, including flutist Jeremy Steig, beginning with his 1975 album Temple of Birth, saxophonists Henry Threadgill, Brian Landrus, and James Carter, and drummer Ronald Shannon Jackson who occasionally played bass flute as a second instrument. Hubert Laws features the bass flute on his recording of "Amazing Grace," in which he plays the first verse on bass flute, the second on alto, and the third on soprano. Steig later took up the Kotato & Fukushima bass flute in F.

In electronic music, Jack Dangers has sometimes used bass flute as the leader of the Meat Beat Manifesto.

A bass flute is heard throughout George Bruns' score for The Jungle Book and the original Pirates of the Caribbean attraction.

Perhaps the best-known work to feature the bass flute is the album Wave by Antônio Carlos Jobim.

All content from Kiddle encyclopedia articles (including the article images and facts) can be freely used under Attribution-ShareAlike license, unless stated otherwise. Cite this article:
Bass flute Facts for Kids. Kiddle Encyclopedia.