Kids Encyclopedia Facts
This page is about the Sydney suburb. For the Indigenous rock art site, see Turramurra, Queensland. 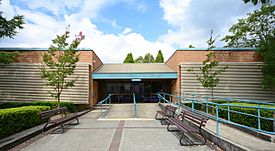 Turramurra is a suburb on the Upper North Shore of Sydney, in the state of New South Wales, Australia. It is located 16 kilometres (10 mi) north-west of the Sydney central business district, in the local government area of Ku-ring-gai Council. It shares the postcode of 2074 with the adjacent suburbs of North Turramurra, South Turramurra and Warrawee.

Turramurra is an Aboriginal word which is thought to mean either high hill, big hill, high place, or small watercourse. The Aboriginal reference of high hill covered the range from Pymble to Turramurra. Early European settlers referred to the area as Eastern Road.

The name Turramurra was adopted when the railway station was built in 1890.

One of the early local landmarks was Ingleholme, a two-storey Federation home in Boomerang Street. It was designed by John Sulman (1849–1934) as his own home and built circa 1896. The house was part of the Presbyterian Ladies College (now the Pymble Ladies' College) until 1977 and is now on the Register of the National Estate. It is notable as an example of John Sulman's style.

The Hillview estate, situated on the Pacific Highway, started circa 1890 with a modest Federation cottage facing the highway. Later, the owner realized the commercial potential of the site, with its sweeping views, and built a grand, two-storey Federation home at the rear, to be used as a guesthouse, circa 1913. A large, six-car garage with a dwelling above it was added at the western end of the site in 1915. The estate was later leased out to Ku Ring Gai Hospital, Hornsby, to be used as the Hillview Community Health Centre. The entire estate is heritage-listed.

The Pacific Highway (A1) is a major arterial road in Turramurra. Turramurra railway station is on the North Shore & Western Line of the Sydney Trains network. Transdev NSW buses run services from the railway station to local residential areas and schools.

Turramurra is a hilly suburb approximately 170 metres above sea level. On the south-eastern boundary, bordering with Pymble is Sheldon Forest, which has some of the best preserved examples of blue gums and turpentine high forest.

East Turramurra is an unofficial urban locality of Turramurra. It is situated in the area of Turramurra east of Bobbin Head Road. It has a small shopping area called Princes Street shops.

Ku-ring-gai Council has several sporting fields in the area, including a large tennis and netball facility at the end of Canoon Road and Kent Oval which has children's play equipment and tennis courts. Tennis courts and a basketball court are located at Hamilton Park. Irish Town Grove is a park located behind Princes Street shops in East Turramurra. Karuah Oval is a large oval located next to Karuah Road. Turramurra Memorial Park is a large park with an oval, four tennis courts (two grass and two hard), two table tennis tables, a running track, children's play area, outdoor exercise area and public toilets.

Comenarra Park on the Comenarra Parkway has cricket and a soccer field. It also has bushwalking tracks leading into the Lane Cove National Park.

Scouting groups in Turramurra take part in a range of outdoor, social and community service activities. 1st Turramurra Scout Group has active programs for boys and girls aged from 8-11 (Cub Scouts), 11-15 (Scouts) through to young men and women 15-17 (Venturer Scouts) and 18-25 (Rovers).

Kissing Point Rover Scout Crew is also based in Turramurra.

The local Kissing Point Cricket Club fields a number of senior and junior sides in the Hornsby, Ku-ring-gai & Hills District Cricket Association. The club was established in 1961.

All content from Kiddle encyclopedia articles (including the article images and facts) can be freely used under Attribution-ShareAlike license, unless stated otherwise. Cite this article:
Turramurra Facts for Kids. Kiddle Encyclopedia.