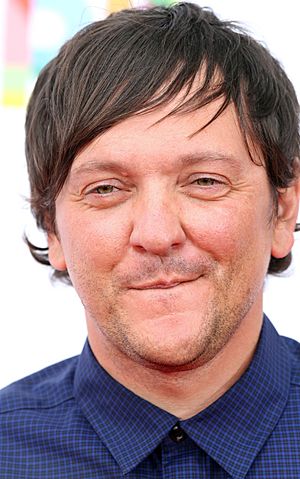 Christopher Daniel Lilley (born 10 November 1974) is an Australian comedian, television producer, actor, musician and writer. He is known for his creation and portrayal of several characters in the mockumentary television series We Can Be Heroes: Finding The Australian of the Year (2005), Summer Heights High (2007), Angry Boys (2011), Ja'mie: Private School Girl (2013), Jonah from Tonga (2014) and Lunatics (2019). He has also won the Logie Award for Most Popular Actor twice.

Lilley was born in Sydney, New South Wales, and grew up in Turramurra. He lives in Melbourne, Victoria. He is a vegetarian.

All content from Kiddle encyclopedia articles (including the article images and facts) can be freely used under Attribution-ShareAlike license, unless stated otherwise. Cite this article:
Chris Lilley (comedian) Facts for Kids. Kiddle Encyclopedia.