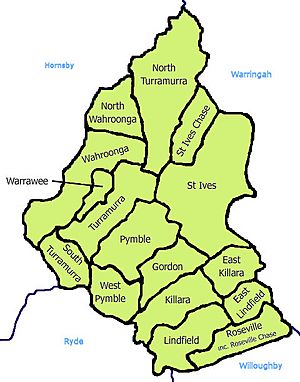 St Ives is a suburb on the Upper North Shore of Sydney in the state of New South Wales, Australia 18 kilometres north of the Sydney Central Business District in the local government area of Ku-ring-gai Council. St Ives Chase is a separate adjacent area, designated suburb, to the west and north.

The St Ives area was first explored by Governor Arthur Phillip and a party of men in 1788 where they set up a campsite at Bungaroo which is close to what is now Hunter Avenue. The area produced a small scale timber felling industry. There are still some examples of the thirty metre and higher trees in nearby Pymble in the Dalrymple Hay forest and near Canisius College. Native turpentine trees were also once abundant and provided useful timber for cabinet making. It was once known for its apple orchards but due to residential demand, there is no longer any commercial fruit growing in the area. During World War II there were significant numbers of troops barracked in the area, which provided the impetus to build Archbold Road as a supplementary and emergency route to the city. Since 1950 the suburb has expanded from the central shopping areas and the arterial main roads to include hilltop and valley areas bordering on the surrounding Ku-ring-gai Chase National Park to the north, now the area known as St Ives Chase, and Garigal National Park to the east and the south east.

St Ives Post Office opened on 10 November 1885 and the first public school opened on 6 May 1889. The school was formally opened by Mr. J. P. Burns, M.L.A. on Saturday 8 June. After inspecting the "neat and well-designed school and teacher's residence" the party had a luncheon to mark the occasion.

St Ives was initially slow to develop due to the perceived remoteness from the city. Settlement increased in the late 1890s, when St Ives was populated by market gardeners, a small dairy, orchard workers and related industries. The suburb since the end of WW2 has seen its most rapid period of expansion and a steady growth in families moving to the area.

Of occupied private dwellings in St Ives, 78.8% were separate houses, 6.0% were semi-detached (row or terrace houses, townhouses etc.), 15.1% were flats, units or apartments.

All content from Kiddle encyclopedia articles (including the article images and facts) can be freely used under Attribution-ShareAlike license, unless stated otherwise. Cite this article:
St Ives, New South Wales Facts for Kids. Kiddle Encyclopedia.