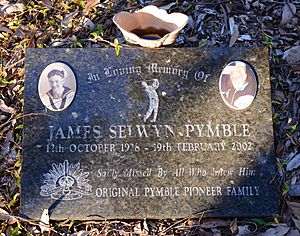 Pymble is a suburb on the Upper North Shore of Sydney in the state of New South Wales, Australia. Pymble is 15 kilometres (9 mi) north-west of the Sydney Central Business District in the local government area of Ku-ring-gai Council.

West Pymble is a separate suburb to the south west of Pymble, adjacent to the Lane Cove National Park.

Based on settlers' accounts the land that came to be known as Pymble was traversed by, and at least periodically inhabited by, what was by that time the "remains" of the Cammeraigal clan or tribe of the Kuringai (also known as Guringai) Aborigines. The Cammeraigal had occupied the land between the Lane Cove River, Hawkesbury and east to the coast. They would travel from grounds at Cowan Creek to the Parramatta River via Pymble - passing west through the land where Pymble Ladies' College now stands, through the Lane Cove Valley and North Ryde. En route they would reportedly hold corroborees at the current site of the Pymble Reservoir on Telegraph Rd and "camped on the hill...at the junction of Merrivale Rd and Selwyn St."

Pymble is named after Robert Pymble (1776–1861), an influential early settler whose 1823 land grant comprised some 600 acres, around half the land of the region. The other half (plus a large part of St Ives) was granted to Daniel der Matthew's, another influential settler who established the first sawmill in the area.

The region was important to the early Sydney colony as a major supplier of timber for a wide variety of uses. The main timber varieties were blackbutt, stringybark, iron bark and blue gum. In later years it was also an important supplier of agricultural produce. It became widely known for the high quality of its produce and especially for its oranges which had been introduced to the area by Robert Pymble sometime around 1828 and which by later years were grown extensively throughout the region by numerous different growers following land sub-divisions.

Eventually agriculture and small farming gave way to residential development with residential sub-divisions commencing around 1879. The first bank - the Australian Joint Stock Bank - was established in 1888 in a then prominent house known as Grandview built on Pymble Hill ca 1883 by the son of local hotelier Richard Porter. Porter had opened the Gardener's Arms Hotel, also on Pymble Hill, in 1866. From this time the centre of commercial activity came to be at the top of the hill around the Pacific Highway and Bannockburn Road area, but with the railway station being located by necessity at the bottom of the hill development began to shift towards the new railway station at the foot of the hill. Pymble Post Office opened there on 6 August 1890.

Prominent landmarks include Pymble Station and Pymble Hill (Pacific Highway). The station is the centre of transport, shopping and social activities whilst Pymble Hill affords a view of the distant Chatswood skyline.

There is a taxi stand on the eastern side of the station in Grandview Street.

At the 2011 census, 24% of employed people travelled to work on public transport and 54% by car (either as driver or as passenger) – a typical reflection of the Sydney area mode of transport.

All content from Kiddle encyclopedia articles (including the article images and facts) can be freely used under Attribution-ShareAlike license, unless stated otherwise. Cite this article:
Pymble, New South Wales Facts for Kids. Kiddle Encyclopedia.