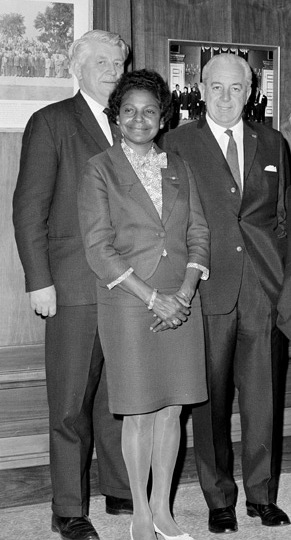 Bandler meeting with Gordon Bryant (left) and Prime Minister Harold Holt in the lead-up to the 1967 referendum.

Faith Bandler AC (27 September 1918 - 13 February 2015; née Ida Lessing Faith Mussing) was an Australian civil rights activist of South Sea Islander and Scottish-Indian heritage. She was a campaigner for the rights of indigenous Australians and South Sea Islanders. Bandler was best known for her leadership in the campaign for the 1967 referendum on Aboriginal Australians.

Bandler was born in Tumbulgum, New South Wales, and raised on a farm near Murwillumbah. Her father had been blackbirded from Ambrym Island, Vanuatu, in 1883, at the age of about 13. He was then sent to Mackay, Queensland, before being sent to work on a sugar cane plantation. He later escaped and married Bandler's mother, a Scottish-Indian woman from New South Wales.

Her father, Wacvie Mussingkon, son of Baddick and Lessing Mussingkon, was taken as a boy in 1883 from Biap, on the island of Ambrym in what is now Vanuatu. His abduction was part of blackbirding, the practice which brought cheap labour to help establish the Australian sugar industry. He was later known as Peter Mussing, a lay preacher and worked on a banana plantation outside Murwillumbah. He died when Bandler was five years old.

Bandler cited stories of her father's harsh experience as a slave labourer as a strong motivation for her activism. In 1934, Bandler left school and moved to Sydney, where she worked as a dressmaker's apprentice.

In 1956, Bandler became a full-time activist, becoming involved in the Aboriginal–Australian Fellowship with Pearl Gibbs, Grace Bardsley, and Bert Groves. Bandler also became involved with the Federal Council for the Advancement of Aborigines and Torres Strait Islanders (FCAATSI), which was formed in 1957. During this period, Bandler worked with her mentors Pearl Gibbs and Jessie Street. As general secretary of FCAATSI, Bandler led the campaign for a constitutional referendum to remove discriminatory provisions from the Constitution of Australia. The campaign, which included several massive petitions and hundreds of public meetings arranged by Bandler, resulted in the 1967 referendum being put to the people by the Holt government. The referendum succeeded in all six states, attracting nearly 91 percent support across the country.

In 1975, Bandler visited Ambrym Island, where her father had been kidnapped 92 years before. Throughout the 1970s, Bandler was a prominent member of the Women's Electoral Lobby in New South Wales. 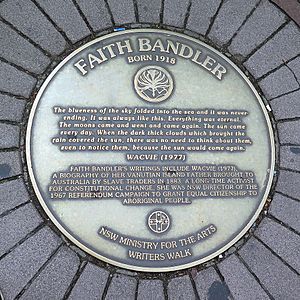 In 1974, Bandler started working on 4 books, two histories of the 1967 referendum, an account of her brother's life in New South Wales, and a novel about her father's experience of blackbirding in Queensland. Beginning in 1974, she also started campaigning for the rights of South Sea Islander Australians. According to Bandler's biographer, feminist writer and historian Marilyn Lake, this campaign was more challenging than the FCAATSI campaign for the 1967 referendum, since Bandler was fighting on two fronts. Not only was she battling historians who insisted that the blackbirded South Sea Islanders were actually voluntary indentured servants, but she was also to some extent ostracised by indigenous Australians in the Australian civil rights movement, due to the increasing influence of separatist Black Power ideology.

In 1952, Faith married Hans Bandler, a Jewish refugee from Vienna, Austria, and lived in Frenchs Forest. During the war, Hans had been interned in the Nazi labour camps. The couple had a daughter, Lilon Gretl, born in 1954, and a fostered Aboriginal Australian son, Peter (Manual Armstrong). Hans died in 2009. Faith Bandler died at the age of 96 in February 2015.

A 1993 portrait of Bandler by artist Margaret Woodward is held by the State Library of New South Wales.

All content from Kiddle encyclopedia articles (including the article images and facts) can be freely used under Attribution-ShareAlike license, unless stated otherwise. Cite this article:
Faith Bandler Facts for Kids. Kiddle Encyclopedia.