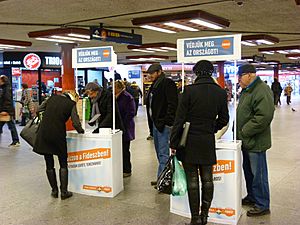 A petition is a request to change some thing. They are often made to a government official or public entity. Petitions to a deity are a form of prayer.

Petition can also be the title of a legal pleading that initiates a legal case. The initial pleading in a civil lawsuit that seeks only money (damages) might be called (in most U.S. courts) a complaint. An initial pleading in a lawsuit that seeks non-monetary or "equitable" relief, such as a request for a writ of mandamus or habeas corpus, custody of a child, or probate of a will, is instead called a petition. A petitioner is a person who pleads with governmental institution for a legal remedy or a redress of grievances, through use of a petition.

All content from Kiddle encyclopedia articles (including the article images and facts) can be freely used under Attribution-ShareAlike license, unless stated otherwise. Cite this article:
Petition Facts for Kids. Kiddle Encyclopedia.