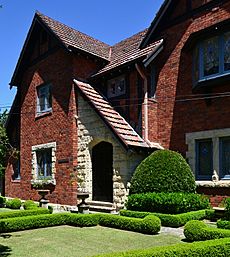 Warrawee is a suburb on the Upper North Shore of Sydney in the state of New South Wales, Australia. Warrawee is located 21 kilometres north-west of the Sydney Central Business District in the local government area of Ku-ring-gai Council. Warrawee is predominantly a residential area with few commercial entities. Notably its railway station provides no commercial activity (unique in this regard within the Sydney network).

This should not be confused with Wirawee, the fictional small country town in the Tomorrow series of books for young people by John Marsden and the film derived from the first book, Tomorrow when the war began.

Warrawee is believed to have come from an Aboriginal word meaning rest a while, stop here or to stand.

In 1888, the public servant and patron of exploration Frederick Ecclestone du Faur built his house Pibrac in Pibrac Avenue. The house was designed by John Horbury Hunt, a Canadian architect who settled in Australia and favoured the Arts and Crafts style, as well as the North American Shingle style, which he introduced to Australia. Later alterations were carried out by B.J. Waterhouse. The house is composed predominantly of timber, with extensive use of timber shingles, on a sandstone base. It is considered a good example of Hunt's work and is listed on the Register of the National Estate.

Cheddington, the oldest home in established Hastings Road, is also attributed to Horbury Hunt, of brick and slate, with characteristic shingling.

Wirepe, designed by M.B. Halligan for architect Walter Traill, used deep verandahs and high ceilings to elicit a homestead atmosphere, with fine corbelled chimneys and cedar shingles. The brickwork is of Colonial Bond design, and the house sits at the heart of the Ku-ring-gai heritage precinct on Hastings Road.

Upton Grey (now Kooyong) was built in 1894 to a John Sulman design; its English features are a local landmark. Across the century it has served as a government social services home, a CSIRO field station, and a boarding house for Knox Grammar School. It is now in private hands and retains features replicated at Sulman's important Ingleholme.

As all North Shore suburbs with aboriginal names, Warrawee was the name of a railway station which became attached to the surrounding suburb. Warrawee had developed in the 1900s as an exclusive residential district with no shops, offices, post office, public school, churches or through roads. All the blocks were kept to between one and four acres and the form of houses tightly controlled. Joseph Beresford Grant used his money to guarantee the exclusiveness of the development.

The architect William Hardy Wilson built his home, Purulia, in Fox Valley Road in 1913. The house was relatively unusual at the time, but became a significant influence over the years. It is heritage-listed.

At the 2011 census, 27% of employed people travelled to work on public transport compared to 10% average for all of Australia, while 51% travelled by car (either as driver or as passenger) compared to 66% nationally.

All content from Kiddle encyclopedia articles (including the article images and facts) can be freely used under Attribution-ShareAlike license, unless stated otherwise. Cite this article:
Warrawee, New South Wales Facts for Kids. Kiddle Encyclopedia.