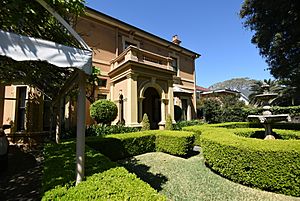 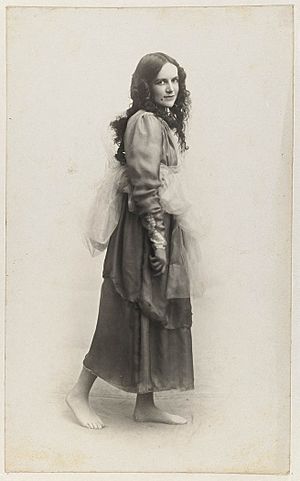 Dorothea Mackellar dressed as one of the Graces for Mrs. T.H. Kelly's Italian Red Cross Day tableaux at the Palace Theatre, 20 June 1918

The third child and only daughter of physician and parliamentarian Sir Charles Mackellar and his wife Marion Mackellar (née Buckland), the daughter of Thomas Buckland, she was born in the family home Dunara at Point Piper, Sydney, Australia in 1885. Her later home was Cintra at Darling Point (built in 1882 by John Mackintosh for his son James), and in 1925, she commissioned a summer cottage (in reality a substantial home with colonnaded verandah overlooking Pittwater), "Tarrangaua" at Lovett Bay, an isolated location on Pittwater reachable only by boat (this home is currently the residence of the novelist and author Susan Duncan and her husband, Bob Story, and features prominently in a number of Susan's books). A woman of independent means, she published poetry and other works between 1908 and 1926 and was active in the Sydney literary scene of the 1930s, being involved with the Sydney Publishers, Editors and Novelists Club, the Bush Book Club of New South Wales and the Sydney P.E.N. Club. In her later years she ceased writing and, suffering poor health, her last eleven years were spent in a nursing home in Randwick where she died in 1968, aged 82. She is buried in Waverley Cemetery, in Sydney's Eastern suburbs in Australia.

Although she was raised in a professional urban family, Mackellar's poetry is usually regarded as quintessential bush poetry, inspired by her experience on her brothers' farms near Gunnedah, in the north-west of New South Wales. Her best-known poem is My Country, written at age 19 while homesick in England, and first published in the London Spectator in 1908 under the title Core of My Heart: the second stanza of this poem is among the best known in Australia. Four volumes of her collected verse were published: The Closed Door (published in 1911, contained the first appearance of My Country); The Witch Maid, and Other Verses (1914); Dreamharbour (1923); and Fancy Dress (1926).

In addition to writing poems, Mackellar also wrote novels, one by herself, Outlaw's Luck (1913), and at least two in collaboration with Ruth Bedford. These are The Little Blue Devil (1912) and Two's Company (1914). According to Dale Spender, little has been written or is yet known about the circumstances behind this collaboration.

In the New Year's Day Honours of 1968, Dorothea Mackellar was appointed an Officer of the Order of the British Empire for her contribution to Australian literature. She died two weeks later in Paddington, New South Wales after a fall. She is buried with her father and family in Waverley Cemetery overlooking the open ocean. Also her poem Colour, her own favourite, was read at the service.

A federal electorate covering half of Sydney's Northern Beaches is named in her honour as well as a street in the Canberra suburb of Cook.

On Australia Day, 26 January 1983, a memorial to Dorothea Mackellar was unveiled and dedicated in ANZAC Park, Gunnedah. The centrepiece of the memorial, a statue of Mackellar on horseback by Dennis Adams, was a temporary fibreglass version. The finished bronze version was installed in September 1983.

In conjunction with the January unveiling, there was an exhibition of a series of 34 water colour paintings by Jean Isherwood illustrating My Country. The watercolours were eventually put on permanent display in the Gunnedah Bicentennial Regional Gallery. Isherwood set about painting a series of oils based on the watercolours which were exhibited at the Artarmon Galleries in Sydney in 1986.

In 1984, Gunnedah resident Mikie Maas created the "Dorothea Mackellar Poetry Awards", which has grown into a nationwide poetry competition for Australian school students.

All content from Kiddle encyclopedia articles (including the article images and facts) can be freely used under Attribution-ShareAlike license, unless stated otherwise. Cite this article:
Dorothea Mackellar Facts for Kids. Kiddle Encyclopedia.