Gunnedah is a town in north-eastern New South Wales, Australia and is the seat of the Gunnedah Shire local government area. In the 2011 census the town recorded a population of 7,888. Gunnedah is situated within the Liverpool Plains, a fertile agricultural region, with 80% of the surrounding shire area devoted to farming. The Namoi River flows west then north-west through the town providing water beneficial to agricultural operations in the area.

Gunnedah is located on the Oxley and Kamilaroi Highways providing convenient road links to much of the northern sector of the state including to the regional centre Tamworth, 75 kilometres (47 mi) distant. The town has a station on the Mungindi railway line and is served by the daily NSW TrainLink Xplorer passenger service to and from Sydney and Moree.

It claims the title "Koala Capital of World". That title is also claimed by the Port Stephens area north of Newcastle and Port Macquarie.

Gunnedah and the surrounding areas were originally inhabited by Aborigines speaking the Kamilaroi (Gamilaraay) language. The area now occupied by the town was settled by European sheep farmers in 1833 or 1834. With settlement in the area focused on wool production, Gunnedah was initially known as 'The Woolshed' until taking its name from the local Indigenous people who called themselves the Gunn-e-darr, the most famous of whom was Cumbo Gunnerah.

Dorothea Mackellar wrote her famous poem My Country (popularly known as I Love a Sunburnt Country) about her family's farm near Gunnedah. This is remembered by the annual Dorothea Mackellar Poetry Awards for school students held in Gunnedah.

Coal was discovered on Black Jack Hill in 1877. By 1891, 6,000 tons of coal had been raised from shafts. The Gunnedah Colliery Company was registered in May 1899 and by 22 June a private railway some 5.7 kilometres (3.5 mi) in length had been completed from the railway station to their mine. In September 1957, the Government Railway took over the working of the line.

In early 2012, Gunnedah experienced a mining boom resulting in rental properties being leased by mining companies for up to $1,350 per week.

Gunnedah Shire is situated 264 metres (866 ft) above sea level on the Liverpool Plains in the Namoi River valley. It is very flat; the tallest hills are 400 to 500 metres (1,300 to 1,600 ft) above sea level. The climate is hot in summer, mild in winter and dry, although rainstorms in catchment areas occasionally cause flooding of the Namoi River. Major floods cut transport links to the town, briefly isolating it from the outside world. The town is located on a rich coal seam and within the northern New South Wales wheat belt.

The Gunnedah area is noted for its abundance of native wildlife, including kangaroos, echidnas and koalas. Koalas can often be found in trees within the town, as well as in the surrounding countryside with the help of signs placed by the local tourist centre. The koala population is considered to be the largest koala colony in the state, west of the Great Dividing Range.

Gunnedah has a harsh climate with temperatures regularly rising above 40 °C in summer and dropping below 0 °C in winter, being one of the few Australian towns to experience temperature variations like this., which is spread throughout the year, however severe thunderstorms in the summer months often cause heavy downpours which boost rainfall totals. 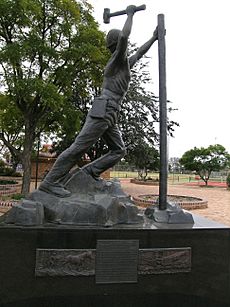 Monument to miners who have lost their lives, Gunnedah, NSW

Gunnedah railway station is situated on the Mungindi (or North West) railway line, 475 kilometres (295 mi) from Sydney. The station, opened in 1879, consists of a substantial station building on a single side platform, a passing loop and small goods yard. There are also sidings serving an adjacent flour mill. To the west of the station there are extensive sidings serving grain silos and loop sidings serving coal loading facilities. For a brief three-year period after the railway arrived in Gunnedah it was the railhead until construction was completed to Boggabri and then to Narrabri South Junction in 1882. Currently a single daily Xplorer diesel railmotor operating between Sydney and Moree serves the station. 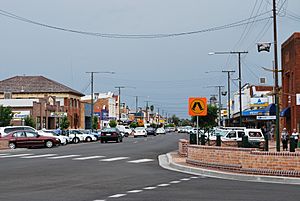 All content from Kiddle encyclopedia articles (including the article images and facts) can be freely used under Attribution-ShareAlike license, unless stated otherwise. Cite this article:
Gunnedah Facts for Kids. Kiddle Encyclopedia.