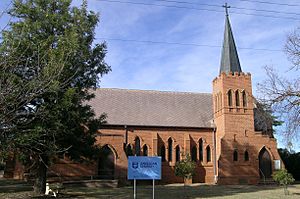 Manilla is a small town in New South Wales, Australia, located on Fossickers Way 45 kilometres northwest of the regional city of Tamworth and 27 kilometres northeast of the historic village Somerton. At the 2006 census, Manilla had a population of 2,081 people. Manilla is famous for its setting as a fishing and paragliding area. The name Manilla comes from the Gamilaraay language, and is said to mean 'winding river'.

Manilla was established in the 1850s at the junction of the Namoi River and the Manilla River. It was formerly the centre of Manilla Shire local government area, but this was amalgamated with Tamworth City Council and portions of Parry, Barraba and Nundle Shire Councils to form Tamworth Regional Council in 2004. It lies next to the Bundarra-Barraba Important Bird Area which is important for the conservation of the endangered regent honeyeater. Manilla is also well known for Split Rock Dam on the Manilla River and Lake Keepit on the Namoi River.

The junction of the Manilla and Namoi Rivers was for generations, a camping ground for the local indigenous people, members of the large Kamilaroi (Gamilaraay) tribes of northwestern New South Wales. During the 1850s, teamsters with bullock waggons were regularly transporting goods from the Hunter District through the Manilla area to outlying cattle stations and the northern goldfield settlements of Bingara and Bundarra. Teams were often delayed at the junction of the Namoi and Manilla Rivers by high water. In 1853, enterprising Englishman George Veness arrived at ‘The Junction’ to set up a store and wine shop at the teamsters’ camping ground. In doing so, Veness led the way to town settlement and is acknowledged as the Founder of Manilla. The town's early prosperity was founded on the highly productive wheat and pastoral industries.

Manilla also features a new library centre. Located within the Tamworth Regional Council office in the main street of Manilla, the library is a new type of facility which is known globally as a convergence centre. This means there are many facilities on offer including Centrelink Agency, the Manilla Book Club, a free weekly Storytime for preschool aged children and many other community activities.

Australian singer-songwriter Darren Hanlon immortalised the town of Manilla in his song 'Manilla NSW' which appeared on his 2006 record, 'Fingertips and Mountaintops'.

All content from Kiddle encyclopedia articles (including the article images and facts) can be freely used under Attribution-ShareAlike license, unless stated otherwise. Cite this article:
Manilla, New South Wales Facts for Kids. Kiddle Encyclopedia.