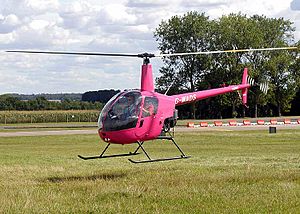 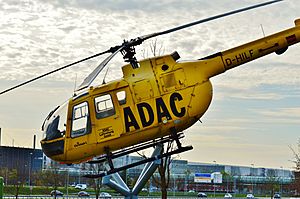 A helicopter (also often used: chopper or heli) is a kind of flying machine or aircraft. A helicopter lifts up off of the ground and moves because of its rotors. A rotor is several small wings, called rotor blades, that spin together around a shaft. For that reason, helicopters are sometimes called rotary-wing aircraft. A helicopter flies differently from an airplane. An airplane must move forward to stay in the air, but because the helicopter's rotor blades are always moving, the helicopter can stop and stay in one place above the ground. This allows them to land in places where an airplane cannot. Helicopters can move by tilting their rotor blades, which causes the aircraft to fly in the direction the blades are tilted.

Since around 400 BC, the Chinese had a flying top that was used as a children's toy. The flying top was made from bamboo and used the same method of spinning wings to fly up in the air. Later flying tops were made of feathers tied to a stick. Leonardo da Vinci first thought of a helicopter flown by a man in 1490, and drew pictures of his ideas. It was hundreds of years later (in the early 20th century) before anyone built one that could really fly. The first practical helicopters were built by Frenchman Louis Breguet in 1935 and by German Henrich Focke in 1936. A Russian immigrant, Igor Sikorsky, built and perfected the first practical helicopter in America in 1939. 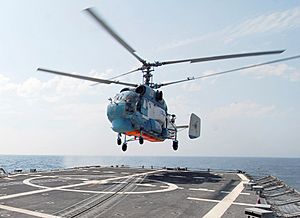 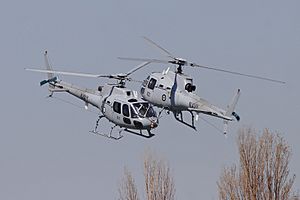 There are three basic flight conditions for a helicopter: hover, forward flight and the transition between the two.

Hovering is the most challenging part of flying a helicopter. This is because a helicopter generates its own gusty air while in a hover, which acts against the fuselage and flight control surfaces. The end result is constant control inputs and corrections by the pilot to keep the helicopter where it is required to be. Despite the complexity of the task, the control inputs in a hover are simple. The cyclic is used to eliminate drift in the horizontal plane, that is to control forward and back, right and left. The collective is used to maintain altitude. The pedals are used to control nose direction or heading. It is the interaction of these controls that makes hovering so difficult, since an adjustment in any one control requires an adjustment of the other two, creating a cycle of constant correction.

Transition from hover to forward flight

As a helicopter moves from hover to forward flight it enters a state called translational lift which provides extra lift without increasing power. This state, most typically, occurs when the airspeed reaches approximately 16–24 knots, and may be necessary for a helicopter to obtain flight.

In forward flight a helicopter's flight controls behave more like those of a fixed-wing aircraft. Displacing the cyclic forward will cause the nose to pitch down, with a resultant increase in airspeed and loss of altitude. Aft cyclic will cause the nose to pitch up, slowing the helicopter and causing it to climb. Increasing collective (power) while maintaining a constant airspeed will induce a climb while decreasing collective will cause a descent. Coordinating these two inputs, down collective plus aft cyclic or up collective plus forward cyclic, will result in airspeed changes while maintaining a constant altitude. The pedals serve the same function in both a helicopter and a fixed-wing aircraft, to maintain balanced flight. This is done by applying a pedal input in whichever direction is necessary to center the ball in the turn and bank indicator. 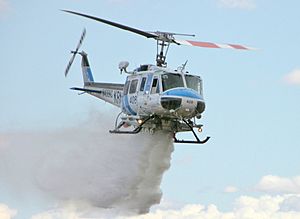 A Bell 205 dropping water onto a fire

Helicopters are especially useful when there are disasters. Food packets, water, medicines and clothes are dropped from the air to people on the ground who cannot be reached by road. When people are injured, helicopters can carry them to hospitals faster than an ambulance on the road. Helicopters are also used by the military, because they can move troops and equipment to places an airplane cannot take them. Attack helicopters act as attack aircraft carrying and shooting guns and missiles.

All content from Kiddle encyclopedia articles (including the article images and facts) can be freely used under Attribution-ShareAlike license, unless stated otherwise. Cite this article:
Helicopter Facts for Kids. Kiddle Encyclopedia.