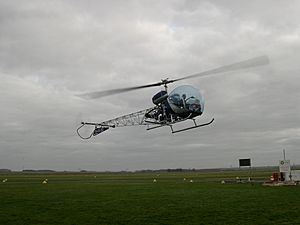 The Bell 47 is an American helicopter. It was the first civilian helicopter in the world built in series. Militaries used it as OH-13. It was built under licence in Italy by Agusta and in Japan by Kawasaki. Its first flight was in 1947.

All content from Kiddle encyclopedia articles (including the article images and facts) can be freely used under Attribution-ShareAlike license, unless stated otherwise. Cite this article:
Bell 47 Facts for Kids. Kiddle Encyclopedia.