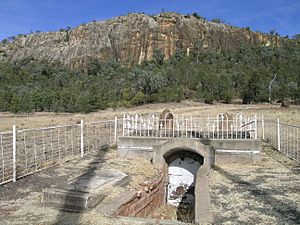 Boggabri ( bog-Ə-bry) is a small town in north-western New South Wales, Australia. It is part of Narrabri Shire and lies between Gunnedah and Narrabri on the Kamilaroi Highway. At the 2016 census, the town had a population of 856 people.

The original town site was 20 km (12 mi) south and settled in the 1830s, but was relocated after a flood washed it away in the 1850s. Boggabri comes from Gamilaraay bagaaybaraay, literally "having creeks". It is likely a reference to the Namoi River, which passes through Boggabri.

Boggabri's main tourist attraction is Gin's Leap. Its name derives from the story of an Aboriginal girl who was promised to an elder of her tribe, the Kamilaroi, and ran away with a young man from a neighbouring tribe. The couple were pursued and, seeing no escape, jumped from the cliff to their deaths.

Dripping Rock is another natural attraction featuring water that seeps through sedimentary rock and drips down a 50 m (160 ft) high wall. The water cascades down into a rock pool below after good rain creating a local waterfall.

The town is also home to the Boggabri John Prior Health Service and Prior House Frail Aged Care Home, both named after resident Dr John Prior OAM (1922–2014), who served as the community's sole doctor for half a century and is believed to be New South Wales' longest serving GP.

Boggabri railway station is situated on the Mungindi line, 515 km from Sydney. The station opened in 1882 consists of a station building on a single side platform, a passing loop and small goods yard. Currently a single daily Xplorer diesel railmotor operating between Sydney and Moree serves the station.

The churchman Roland St John MBE and his barrister brother Edward St John QC MP were born at Boggabri when their father was Anglican rector there.

In 1946, Boggabri's rugby league club player, Trevor Eather, was selected to play for the Australian national team. The local team is the Boggabri Kangaroos.

Mahla Pearlman AO (2 June 1937 – 2 December 2011) was the first woman to become chief judge of any jurisdiction within the NSW legal system. She was born at Boggabri to a local farming family, the Pearlmans. Her grandfather Abraham Pearlman had come to Boggabri as a shopkeeper, becoming a farmer in 1905 on the acquisition of the property Herzlton.

All content from Kiddle encyclopedia articles (including the article images and facts) can be freely used under Attribution-ShareAlike license, unless stated otherwise. Cite this article:
Boggabri Facts for Kids. Kiddle Encyclopedia.