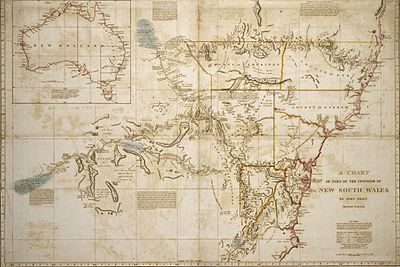 John Joseph William Molesworth Oxley (1784 – 25 May 1828) was an explorer and surveyor of Australia in the early period of British colonisation. He served as Surveyor General of New South Wales and is perhaps best known for his two expeditions into the interior of New South Wales and his exploration of the Tweed River and the Brisbane River in what is now the state of Queensland.

John Oxley was born at Kirkham Abbey near Westow in Yorkshire, Great Britain. He was baptised at Bulmer on 6 July 1784, his parents recorded as John and Arabella Oxley.

John Oxley entered the English Royal Navy when he was aged eleven. He travelled to Africa in October 1802 as master’s mate of the naval-vessel Boo, which carried out coastal surveying (including the survey of Western Port). In 1805 Oxley was promoted to second lieutenant. In 1806 he commanded the Estramina on a trip to Van Diemen's Land (now Tasmania). He returned to England in 1807 and was appointed first lieutenant of 'Porpoise, joining her in 1808. In 1809 Porpoise visited Van Diemen's Land, carrying as a passenger Governor William Bligh who had been deposed in the Rum Rebellion. 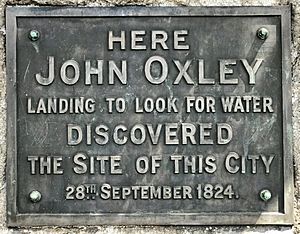 In March 1817 John Oxley was instructed to take charge of an expedition to explore and survey the course of the Lachlan River. He left Sydney on 6 April 1817 with George Evans as second-in-command, and Allan Cunningham as a botanist. The previous year, Evans had accompanied Macquarie over the Blue Mountains to Bathurst on the celebratory completion of Cox's road, where Macquarie had directed him on an exploratory journey which resulted in Evans reaching and naming the Lachlan River west of Bathurst in May 1815. The party also included William Parr as a mineralogist and draftsman.

Oxley's party reached Bathurst after a week, where they were briefly detained by bad weather. On 25 April 1817, they reached the Lachlan River Depot which had been prepared for them (with provisions and supplies) in advance by a separate party under the direction of William Cox. From here, they commenced following its course, with part of the stores being conveyed in boats. As the exploring party travelled westward the country surrounding the rising river was found to be increasingly inundated. On 12 May, west of the present township of Forbes, they found their progress impeded by an extensive marsh. They travelled down a northern branch of the river to Mt Mulguthery where they were forced to return up the river.

After retracing their route for a short distance they then proceeded in a south-westerly direction through Ungarie and past Weethalle, intending to travel overland to the southern Australian coastline. By the end of May, the party found themselves in a dry scrubby country northeast of Yenda where they ascended several peaks in the Cocoparra National Park. Shortage of water and the death of two horses forced Oxley's return, passing near Rankins Springs to the Lachlan River.

On 23 June the Lachlan River near Merrigal Bridge was reached. Oxley resolved to turn back and after resting for two days the exploring party began to retrace their steps along the Lachlan River.

They left the Lachlan at Kiacatoo up-stream of the present site of Lake Cargelligo and crossed to the Bogan River and then across to the Wellington Valley on the upper waters of the Macquarie River, which they followed back to Bathurst (arriving on 29 August 1817). The Wellington Valley would later be made the site of a convict settlement mostly for convict 'specials'.

Oxley travelled to Dubbo on 12 June 1818. He wrote that he had passed that day 'over a very beautiful country, thinly wooded and apparently safe from the highest floods...'

Later in 1818 Oxley and his men explored the Macquarie River at length before turning east. On 26 August 1818 they climbed a hill and saw before them rich, fertile land (Peel River), near the present site of Tamworth. Continuing further east they crossed the Great Dividing Range passing by the Apsley Falls on 13 September 1818 which he named the Bathurst Falls. He described it as “one of the most magnificent waterfalls we have seen”. He discovered and named the Arbuthnot Range, since renamed the Warrumbungle Range. Upon reaching the Hastings River they followed it to its mouth, discovering that it flowed into the sea at a spot which they named Port Macquarie. 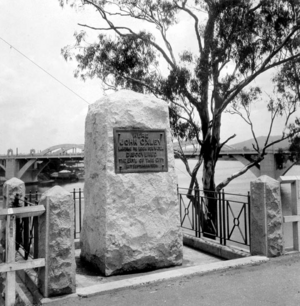 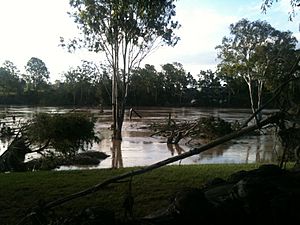 In 1823, Governor Brisbane sent Oxley north by boat in search of a site for an alternative penal settlement for the most difficult convicts. On this journey, he visited the Tweed River and valley and was deeply impressed, recording his impressions as follows: "A deep rich valley clothed with magnificent trees, the beautiful uniformity of which was only interrupted by the turns and windings of the river, which here and there appeared like small lakes. The background was Mt. Warning. The view was altogether beautiful beyond description. The scenery here exceeded anything I have previously seen in Australia." As Surveyor General, Oxley made a close examination of the Tweed River and Port Curtis, and sources connected that investigation, principally the manuscript journal kept by Oxley, and the published Narrative of John Uniack, who accompanied Oxley.

Oxley sailed northwards from the Tweed Area in the Mermaid. Rounding Moreton Island, he came across two escaped convicts who had been living with the Aboriginal people there. With their assistance, he was shown, and named, the Brisbane River. He recommend this place for the site of the convict settlement, which became Moreton Bay, and later the city of Brisbane. A monument was built at North Quay in 1924 to commemorate the site of his landing in Brisbane. He then travelled further north to explore Port Curtis (the site of Gladstone) and continued to explore the region, which is now known as South East Queensland.

In 1824 Oxley, accompanied by Allan Cunningham returned to the Brisbane River and, travelling further up, then located the Bremer River. 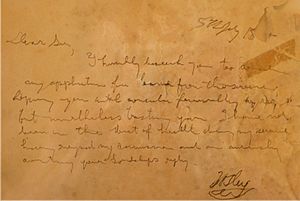 Request for leave due to illness dated 5 July 1824

Governor Lachlan Macquarie granted Oxley 600 acres (240 ha) near Camden in 1810, which he increased to 1,000 acres (400 ha) in 1815. He named this property Kirkham and raised and bred sheep there. He was also briefly a director of the Bank of New South Wales. He was one of five members of the original 1824 New South Wales Legislative Council, but was not reappointed when the Council was reconstituted in 1825.

Oxley had three daughters out of wedlock with two women, before he married a third woman. Two of these daughters were with Charlotte Thorpe and born before his inland expeditions: Jeanette b. 1813 (never married) who died in 1875 and is buried in the historic cemetery at South Head, and Frances b. 1815 who married William Waugh and is buried in Tenterfield. He had another daughter, Louisa b. 1821, with Elizabeth Marmon. This child drowned (aged 3) in early December 1824 in a well opposite Oxley's house in Macquarie Street, Sydney.

In August 1822, Oxley married Emma Norton (1798–1885), the youngest sister of the solicitor James Norton. Emma had followed her brother out to New South Wales from Sussex after he had established himself as an attorney in the colony.

Oxley and Emma Norton had a daughter and two sons. The elder, John Norton Oxley became a Member of the Legislative Assembly, representing the Western Division of Camden, in the first Parliament after the establishment of responsible government in 1856. He sponsored the Broad Gauge Act which encouraged the use of wagons with broad wheels instead of narrow-tired drays in order to cause less wear on public roads; this measure made him unpopular with the farmers and carriers in his electorate and he lost his seat. The younger son, Henry Oxley, also became a Member of the Legislative Assembly, representing the Electoral district of Camden between 1859 and 1860.

Oxley suffered with illness throughout his service, caused by the difficulties of his expeditions. He finally succumbed to his illness and died on 25 May 1828 at his Kirkham property, Kirkham, New South Wales, outside Camden, aged 44.

Places and miscellaneous items bearing his name include:

All content from Kiddle encyclopedia articles (including the article images and facts) can be freely used under Attribution-ShareAlike license, unless stated otherwise. Cite this article:
John Oxley Facts for Kids. Kiddle Encyclopedia.