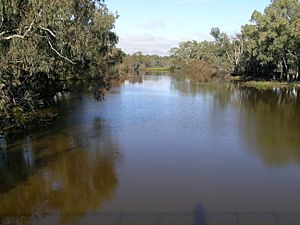 The Bogan River is an inland river of New South Wales, Australia. It begins at Goonumbla, near Parkes. It flows in a north west direction for about 370 mi (595 km) before it joins the Darling River near Bourke. The towns of Tottenham, Peak Hill and Nyngan are built on the banks of the Bogan River.

The first Europen to see the Bogan River was Charles Sturt in 1828-9. He named it New Year Creek. However the Indigenous Australian name, Bogan, which means birthplace of a king, was the name that was used. The explorer Sir Thomas Mitchell created a painting in 1836 of an Aboriginal man, Combo, from the Bogan River.

All content from Kiddle encyclopedia articles (including the article images and facts) can be freely used under Attribution-ShareAlike license, unless stated otherwise. Cite this article:
Bogan River Facts for Kids. Kiddle Encyclopedia.