Port Macquarie is a coastal town in the local government area of Port Macquarie-Hastings. It is located on the Mid North Coast of New South Wales, Australia, about 390 km (242 mi) north of Sydney, and 570 km (354 mi) south of Brisbane. The town is located on the Tasman Sea coast, at the mouth of the Hastings River, and at the eastern end of the Oxley Highway (B56). The town with its suburbs had a population of 45,341 in June 2015.

The site of Port Macquarie was first visited by Europeans in 1818 when John Oxley reached the Pacific Ocean from the interior, after his journey to explore inland New South Wales. He named the location after the Governor of New South Wales, Lachlan Macquarie.

Oxley noted that 'the port abounds with fish, the sharks were larger and more numerous than I have ever before observed. The forest hills and rising grounds abounded with large kangaroos and the marshes afford shelter and support to innumerable wild fowl. Independent of the Hastings River, the area is generally well watered, there is a fine spring at the very entrance to the Port'.

In 1821, Port Macquarie was founded as a penal settlement, replacing Newcastle as the destination for convicts who had committed secondary crimes in New South Wales. Newcastle, which had fulfilled this role for the previous two decades, had lost the features required for a place for dumping irredeemable criminals, that being isolation, which was lost as the Hunter Region was opened up to farmers, and large amounts of hard labour, which had diminished as the cedar in the area ran out and the settlement grew in size. Port Macquarie, however, with its thick bush, tough terrain and local aborigines that were keen to return escaping prisoners in return for tobacco and blankets, provided large amounts of both isolation and hard labour to keep the criminals in control. Under its first commandant, Francis Allman, who was fond of flogging, the settlement became a hell, where the convicts had limited liberties, especially in regard to being in possession of letters and writing papers, which could get a convict up to 100 lashes.

Because of the lack of liberties of the settlement, Governor Ralph Darling quickly sent there many 'specials' or literate convicts with a decent education who had voiced negative views about him. Later on in the settlement's history, in the 1830s, disabled convicts started to arrive. One-armed men would be grouped together and required to break stones, men with wooden legs would become delivery men, and the blind would often be given tasks during the night which they performed more skilfully than those with sight. 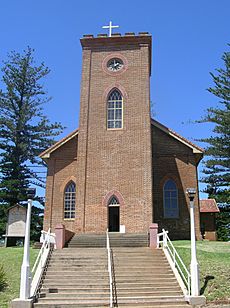 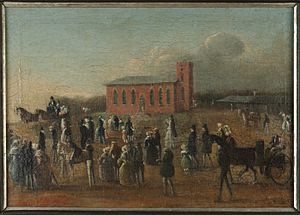 St Thomas' Church, painted by Joseph Backler in the 1830s

In 1823 the first sugar cane to be cultivated in Australia was planted there. The region was first opened to settlers in 1830 and later on in the decade the penal settlement was closed in favour of a new penal settlement at Moreton Bay. Settlers quickly took advantage of the area's good pastoral land, timber resources and fisheries.

St Thomas's Anglican Church is a Georgian building designed by Francis Greenway and built, under the supervision of military engineer Lieutenant T. Owen, by convicts during 1824-1828. This church is among the oldest in Australia and one of the few remaining convict-built churches. Inside there are red cedar box pews that were peculiar to that period in church architecture. The Walker pipe organ is the only one of its type in the southern hemisphere. The castellated tower permits excellent views of the coastline, town and river. This church is now classified by the National Trust of Australia (NSW) and has been registered on the National Estate heritage list. 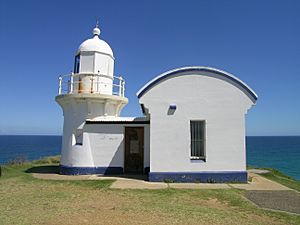 In 1830 Major Archibald Clunes Innes built Lake Innes House which grew over the next decade into a luxurious establishment and attracted many notable visitors. It is now a ruin and is managed by the NSW Parks and Wildlife Service.

In 1840 the "Wool Road" from the Northern Tablelands was under construction to enable wool and other produce to be shipped from the port. Port Macquarie was declared a municipality in 1887, but the town never progressed as a port owing to a notorious coastal bar across the mouth of the river.

Over 20 shipwrecks occurred in the Tacking Point area before a lighthouse was designed by James Barnet and erected there in 1879 by Shepard and Mortley. Tacking Point Lighthouse is classified by the National Trust of Australia (NSW).

Port Macquarie is a retirement destination, known for its extensive beaches and waterways. The town is also known for its koala population, being the home to the Billabong Zoo (a wildlife park and koala breeding center) and the Koala Preservation Society's Koala Hospital, caring for koalas injured through bushfire, dog attacks and collisions with vehicles.

In 2016 the war memorial was relocated from Town Green to its original location at the intersection of Clarence and Horton Streets.

The residential suburbs stretch to Lighthouse Beach in the south, Thrumster to the west and to North Shore, on the northern bank of the river. In July 2010, Sovereign Hills began development in the west.

Port Macquarie was found to be the least affordable smaller city in Australia by Demographia's 2013 International Housing Affordability Survey.

Transit Hill to the south is crowned by telecommunication towers. The district is the site of two arterial roads which provide a direct link between Lighthouse Beach and Port Macquarie CBD. The main intersection of Pacific and Kennedy Drive is situated midway up Transit Hill.

Port Macquarie has a humid subtropical climate, and is widely regarded as one of the most liveable towns in Australia. 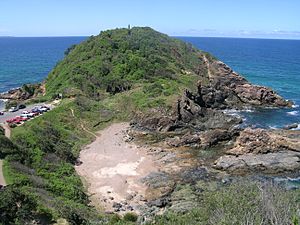 Road access is via the Pacific and Oxley Highways. The Pacific Highway lies between Port Macquarie and Wauchope, and is the main road for tourists travelling from coastal areas. Improvements to the Oxley and Pacific Highway has seen steady improvements in travel times between Sydney and the mid-north coast region

Four significant nearby road projects have been completed in recent years to help with road traffic issues in the area:

These four projects are all from the AusLink funding on a joint basis from the Commonwealth and the state of NSW making equal financial contributions.

Notable events held in the Port Macquarie area include:

All content from Kiddle encyclopedia articles (including the article images and facts) can be freely used under Attribution-ShareAlike license, unless stated otherwise. Cite this article:
Port Macquarie Facts for Kids. Kiddle Encyclopedia.