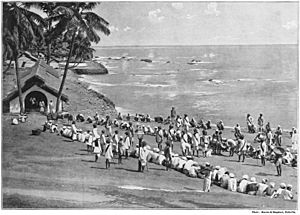 A penal colony is a settlement used to hold prisoners and use them for working in part of the state's (usually colonial) territories. This is much bigger than a prison farm. A famous penal colony was Devil's Island in French Guiana. The British Empire used its colonies in North America as penal colonies for more than 150 years. The first British settlements in Australia were started as penal colonies. 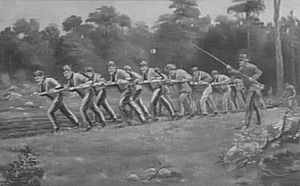 Life in penal colony was often very hard, sometimes including severe physical punishment. Some prisoners were sentenced for the rest of their natural lives. Many died from hunger, disease, neglect, working too hard, or trying to escape.

In the penal colony system, prisoners were sent far away to stop escapes and to make it hard to get home after their prison term finished. Penal colonies were often in unsettled lands, especially places where no else wanted to work or live. The prisoners' unpaid work would help the government develop new areas without spending a lot of money. 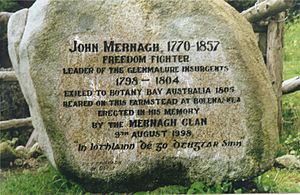 Epigraphy in honour of an Irish prisoner in the Australian penal colony of Botany Bay.

The British used parts of North America as a penal colony. Convicts would be transported by private companies and sold by auction to plantation owners. About 50,000 British convicts were sent to colonial America. This was about one quarter of British settlers during the 1700s.

After the American Revolution, Britain had to find somewhere else to send its prisoners. They established Sydney, Norfolk Island, Van Diemen's Land and Western Australia as big penal colonies.

In colonial India, the British had made various penal colonies. Two of the most infamous ones are on the Andaman islands and Hijli Detention Camp. In the early days of settlement, Singapore was sent Indian convicts. Their job was to clear the jungles for settlement and early public works.

All content from Kiddle encyclopedia articles (including the article images and facts) can be freely used under Attribution-ShareAlike license, unless stated otherwise. Cite this article:
Penal colony Facts for Kids. Kiddle Encyclopedia.