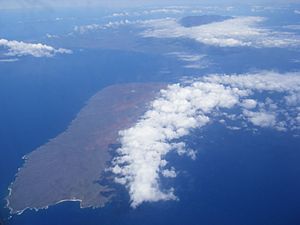 Aerial photo of Kahoʻolave. In the background is Mount Haleakala on Maui.

Kahoʻolawe is the smallest of the 8 main volcanic islands in the Hawaiian Islands, in the United States. It is west of Maui and south of Lanaʻi and is 11 miles long by 6 mi (9.7 km) across (45 sq mi or 120 km2). The highest point, Lua Makika, is 1,477 feet (450 m) above sea level. The island is rather dry because its low height does not cause much rain (orographic precipitation) to fall from the northeastern trade winds.

Kahoʻolawe was used as a gunfire and bombing target by the United States military because of World War II, and a defense training area by the United States Navy from around 1941 until May 1994. Popular feeling in Hawaiʻi against this practice finally won, and the Navy has been trying to finish a cleanup of unexploded ordnance (bombs and explosive shells) from the island. Ordnance is still buried or lying on the ground. Other items have washed down gullies and still other unexploded ordnance is underwater offshore. In 1981, the entire island was included on the National Register of Historic Places.

The island is planned to be given back to the Hawaiian people. In 1993, the U.S. Congress passed a law that "recognized the cultural importance of the island, required the Navy to return the island to the State, and directed the Navy to do an unexploded ordnance (UXO) cleanup and environmental restoration". The turnover officially occurred on November 11, 2003, but the cleanup has not yet been completed. The U.S. Navy was given $400 million and 10 years to complete the large cleanup task, but this work has gone much slower than planned.

In 1993, the Hawaii State Legislature established the Kahoʻolawe Island Reserve. It is made up of the whole island and waters out to 2 mi (3.2 km) from shore. By State Law, Kahoʻolawe and its waters can only be used for Native Hawaiian cultural, spiritual, and subsistence purposes; fishing; environmental restoration; historic preservation; and education. Commercial uses are not allowed. The Legislature also created the Kahoʻolawe Island Reserve Commission (KIRC) to manage the Reserve while it is held in trust for a "future Native Hawaiian Sovereignty entity".

After the cleanup is finished, the restoration of Kahoʻolawe will need ways to control erosion, restore the plant life, recharge the water table, and slowly replace alien plants with native ones. Plans will include methods for damming gullies and reducing rainwater runoff. Non-natives will temporarily stabilize some areas before the permanent planting of native plants.

All content from Kiddle encyclopedia articles (including the article images and facts) can be freely used under Attribution-ShareAlike license, unless stated otherwise. Cite this article:
Kahoolawe Facts for Kids. Kiddle Encyclopedia.