Molokini is a crescent-shaped, partially submerged volcanic crater which forms a small, uninhabited islet located in ʻAlalākeiki Channel between the islands of Maui and Kahoʻolawe, within Maui County in Hawaiʻi. It is the remains of one of the seven Pleistocene epoch volcanoes that formed the prehistoric Maui Nui island, during the Quaternary Period of the Cenozoic Era. 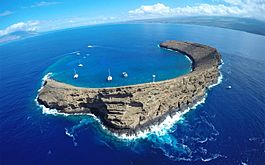 Molokini is a destination for scuba diving, snuba, and snorkeling. Its crescent shape protects divers inside it from waves and the channel's powerful currents, though diving also takes place off the 300-foot (91.5-meter) sheer outer wall. In the morning, when winds are calmer, smaller tour boats also bring guests to snorkel off the outer wall.

The crater houses a reef with visibility as deep as 150 feet (46 m). Molokini is home to about 250 species of fish, many endemic (see Ecology below). The best conditions occur in early morning. The water depth is 20–50 feet in the majority of the allowed dive spots.

Because Molokini attracts many boats, the Hawaii State Division of Boating and Recreation established mooring buoys and "Day Use Mooring Rules" for Molokini to protect against damage from dropped anchors.

In Hawaiian legend, Molokini was a beautiful woman. She and Pele, the fire goddess, were in love with the same man. The jealous Pele cut her rival in two and transformed her into stone. The woman's head is supposedly Puʻu Olai, the cinder cone by Makena Beach.

From the 1950s through the 1970s, commercial harvesting of black coral occurred in Molokini. In 1977 Molokini islet, the crater, and the surrounding 77 acres (31 ha) of underwater terrain were declared a Marine Life Conservation District (MLCD). 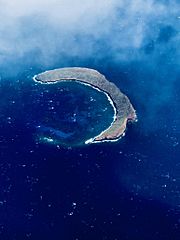 An aerial photo of the west side of Molokini 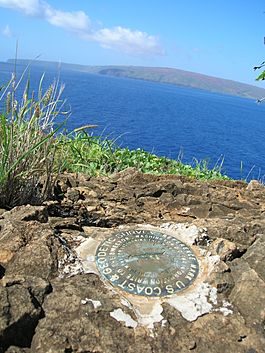 Molokini crater is home to approximately 250 to 260 marine species. Most commonly observed among these are the black triggerfish, yellow tang, Moorish idol, parrotfish, raccoon butterflyfish and bluefin trevally. Due to constant exposure to park visitors and the long history as a conservation district, the fish of Molokini are comfortable with the presence of nearby divers. Small whitetip reef sharks and moray eels are occasionally seen in the crater. In addition, Red pencil urchins can be seen quite frequently.

The waters of Molokini contain 38 hard coral species and approximately 100 species of algae. Although quite dense on the seafloor, they are not as densely packed as they had historically been due to the constant tourism and activity there. The islet is home to at least two species of nesting seabirds — Bulwer's petrels and wedge-tailed shearwaters. Additionally great frigatebirds have been observed on Molokini islet.

Molokini islet is federally owned and is a state seabird sanctuary. Thus, unauthorized landing is prohibited. Permission to land must be obtained both from the U.S. Coast Guard and the Hawaii Division of Forestry and Wildlife.

Regulations covering the Molokini Shoal MLCD (see History above) prohibit fishing, collection or removal of specimens, and fish feeding within its bounds. Additionally, dropping anchor within the MLCD is not permitted due to the potential of damage to the coral reef. Tour boat operators have been allocated fixed mooring points instead.

Snorkeling and scuba diving are by far the most popular activities at the crater. Since the crater is made entirely of rock, the water remains relatively undisturbed by sand and sediment. Visibility at Molokini regularly exceeds 150 feet (45 meters), and the inside of the crater is generally sheltered from strong winds and waves. The back wall of the island has been named one of the top 100 diving destinations in the world by scubadiving.com. This drift dive offers steep drop-offs 360 feet (110 meters) to the ocean floor's reef and underwater life.

All content from Kiddle encyclopedia articles (including the article images and facts) can be freely used under Attribution-ShareAlike license, unless stated otherwise. Cite this article:
Molokini Facts for Kids. Kiddle Encyclopedia.