The Moorish idol (Zanclus cornutus) is a marine fish species, the sole extant representative of the family Zanclidae (from the Greek ζαγκίος, zagkios, "oblique") in order Perciformes. A common inhabitant of tropical to subtropical reefs and lagoons, the Moorish idol is notable for its wide distribution throughout the Indo-Pacific. A number of butterflyfishes (genus Heniochus) closely resemble the Moorish idol. It is closely related to, if not a direct descendant of, the extinct Eozanclus brevirostris, from the Middle Eocene of Monte Bolca.

The Moorish idol got its name from the Moors of Africa, who purportedly believed the fish to be a bringer of happiness. Moorish idols are also a coveted aquarium fish but, despite their abundance and wide array of habitats, they are notoriously finicky and hard to adjust to captivity. Their omnivorous diet can be extremely difficult to replicate in aquaria, as the vegetation which they live on is normally exterminated and they have a habit of eating corals and sponges. 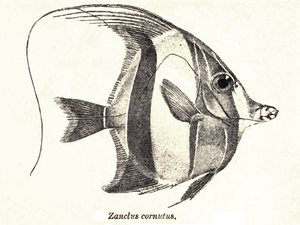 Generally denizens of shallow waters, Moorish idols prefer flat reefs. This fish may be found at depths from 3 to 180 m (9.8 to 590.6 ft), in both murky and clear conditions. Their range includes East Africa, the Indian Ocean, Persian Gulf and the Ducie Islands; Hawaii, southern Japan, and all of Micronesia; they are also found from the southern Gulf of California south to Peru.

Sponges, coral polyps, tunicates, and other benthic invertebrates constitute the bulk of the Moorish idol's diet.

Often seen alone, Moorish idols also form pairs or occasionally small schools, especially as juveniles. They are diurnal fish, sticking to the bottom of the reef at night, adopting a drab coloration. Like butterfly fish, they mate for life. Adult males display aggression toward one another.

Moorish idols are pelagic spawners; that is, they release eggs and sperm in the water column, leaving fertilized eggs to drift away with the currents. The range of these fish may be explained by the unusually long larval stage. The fish reach a length of 7.5 cm (3.0 in) before becoming free-swimming juveniles. 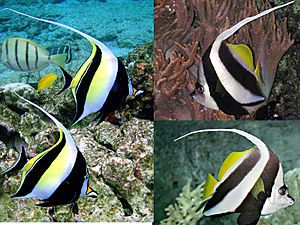 Some aquarists prefer to keep substitute species that look very similar to the Moorish idol. These substitutes are all butterflyfishes of the genus Heniochus, and include the pennant coralfish, H. acuminatus; threeband pennantfish, H. chrysostomus; and the false Moorish idol, H. diphreutes.

Moorish idols typically are very picky eaters. They will either eat nothing (common) and perish or eat everything (uncommon).

All content from Kiddle encyclopedia articles (including the article images and facts) can be freely used under Attribution-ShareAlike license, unless stated otherwise. Cite this article:
Moorish idol Facts for Kids. Kiddle Encyclopedia.