Butterflyfish are a group of conspicuous tropical marine fish in the family Chaetodontidae. The bannerfish and coralfish are also included in this group. They live mostly on the reefs of the Atlantic, Indian and Pacific Oceans. There are about 120 species in 10 genera. 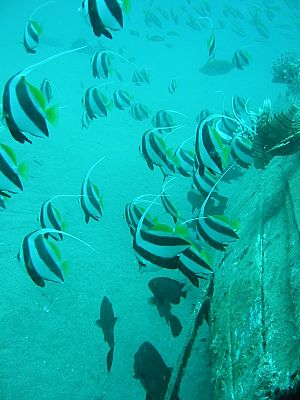 Butterflyfishes mostly range from 12 to 22 cm (4.7 to 8.7 in) in length. The largest species, the lined butterflyfish and the saddle butterflyfish, C. ephippium, grow to 30 cm (12 in). The common name references the brightly coloured and strikingly patterned bodies of many species, bearing shades of black, white, blue, red, orange, and yellow. Other species are dull in colour. Many have eyespots on their flanks and dark bands across their eyes, not unlike the patterns seen on butterfly wings. Their deep, laterally narrow bodies are easily noticed through the profusion of reef life. The conspicuous coloration of butterflyfishes may be intended for interspecies communication. Butterflyfish have uninterrupted dorsal fins with tail fins that may be rounded or truncated, but are never forked.

Their coloration also makes them popular aquarium fish. However, most species feed on coral polyps and sea anemones. Balancing the relative populations of prey and predator is complex, leading hobby aquarists to focus on the few generalists and specialist zooplankton feeders.

Butterflyfishes are pelagic spawners; that is, they release many buoyant eggs into the water, which become part of the plankton, floating with the currents until hatching. The fry go through a tholichthys stage, wherein the body of the postlarval fish is covered in large, bony plates extending from the head. They lose their bony plates as they mature. Only one other family of fish, the scats (Scatophagidae) express such an armored stage.

All content from Kiddle encyclopedia articles (including the article images and facts) can be freely used under Attribution-ShareAlike license, unless stated otherwise. Cite this article:
Butterflyfish Facts for Kids. Kiddle Encyclopedia.