Teleosts are the dominant fish of the present day. They arose in the Mesozoic era, and include 20,000 living species. The oldest teleost fossils date back to the late Triassic. They evolved from fish like bowfins in the clade Holostei. During the Mesozoic and Cainozoic they diversified. 96 percent of all known fish species are teleosts.

Teleosts have a movable jaw and changes in the jaw muscles. These changes make it possible for them to protrude their jaws outwards from the mouth. This adaptation improves their ability to grab fast-moving prey.

The date of origin of the teleosts is a difficult problem. Two kinds of evidence are available. There is evidence from the fossil record, in which the first teleost comes from the late Triassic period.

This date is somewhat later than molecular divergence time estimates (molecular clock). A recent paper finds that fossil dates and molecular clock dates are similar to each other. These researchers atate:

"Divergence times estimated from relaxed-molecular clock analyses yield a comprehensive time-scale of actinopterygian diversification that is remarkably close to ages inferred from the fossil record". 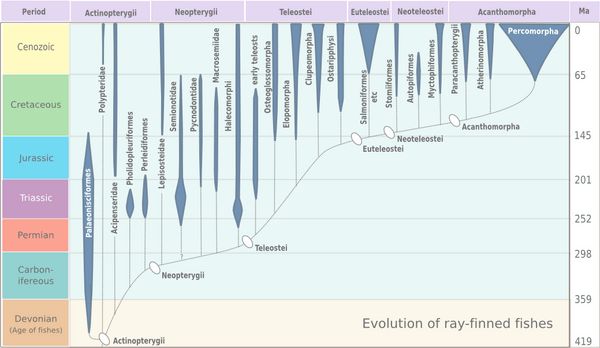 All content from Kiddle encyclopedia articles (including the article images and facts) can be freely used under Attribution-ShareAlike license, unless stated otherwise. Cite this article:
Teleost Facts for Kids. Kiddle Encyclopedia.