Holostei are bony fish that show primitive characteristics. There are eight species divided among two orders, the Amiiformes represented by a single living species, the bowfin (Amia calva), and the Lepisosteiformes, the gars. There are more species to be found in the fossil record.

Holostei share with other non-teleost ray-finned fish a mixture of characteristics of teleosts and sharks. In comparison with the other group of non-teleost ray-finned fish, the chondrosteans, the Holostei are closer to the teleosts and further from sharks: the pair of spiracles found in sharks and chondrosteans is reduced in holosteans to a remnant structure: in gars, the spiracles do not even open to the outside; the skeleton is lightly ossified: a thin layer of bone covers a mostly cartilaginous skeleton in the bowfins. In gars, the tail is still heterocercal but less so than in the chondrosteans. Bowfins have many-rayed dorsal fins and can breathe air like the bichirs.

The gars have thick ganoid scales typical of sturgeons whereas the bowfin has thin bony scales like the teleosts. The gars are therefore in this regard considered more primitive than the bowfin.

The name Holostei derives from the Greek, holos meaning whole and osteon meaning bone: a reference to their bony skeletons. 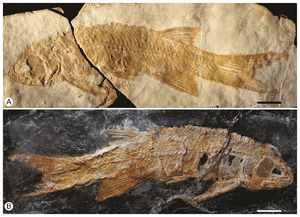 The cladogram shows the relationship of the Holostei to other bony fish, the great majority of which are Teleosts, and to the terrestrial vertebrates (tetrapods) that evolved from a related group of fish. Approximate dates are from Near et al., 2012.

All content from Kiddle encyclopedia articles (including the article images and facts) can be freely used under Attribution-ShareAlike license, unless stated otherwise. Cite this article:
Holostei Facts for Kids. Kiddle Encyclopedia.