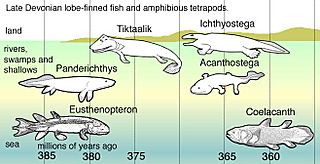 In the later Devonian, descendants of pelagic lobe-finned fish — like Eusthenopteron — were followed by:
Panderichthys, suited to muddy shallows;
Tiktaalik with limb-like fins that could take it onto land;
Early tetrapods in weed-filled swamps, such as: Acanthostega, which had feet with eight digits, and Ichthyostega with limbs. Descendants also included pelagic lobe-finned fish such as coelacanth species.

Coelacanths are the only living sarcopterygians that live in the ocean

The Sarcopterygii is a class of fish. They are lobe-finned fish, like the lungfish and coelacanths. They are a clade of bony fish which first appeared in the Silurian, 418 million years ago (mya). One line in this group gave rise to the tetrapods.

These are bony fishes with paired rounded fins. These fins, being similar to limbs, suggest that these fish may be ancestors of land vertebrates. All sarcopterygians possess teeth covered with true enamel.

As a clade, the group includes all its descendants. This means it includes the Tetrapods, that is, all species of four-limbed vertebrates. The fin-limbs of sarcopterygiians are very similar to what people believe was the ancestral form of tetrapod limbs. The ancestors of tetrapods are to be found amongst the lobe-fins of the Devonian period. The term 'fishapod' is becoming used for this transitional group.

Sarcopterygians and their relatives the Actinopterygii ('ray-finned fish') make up the superclass Osteichthyes, the 'bony fish', which have a bony skeleton rather than cartilage. Otherwise, there are vast differences in fin, respiratory, and circulatory structures between the Sarcopterygii and the Actinopterygii.

The first sarcopterygians, found in the uppermost Silurian (about 418 mya), closely resembled the Acanthodii, the 'spiny fish' which went extinct at the end of the Palaeozoic era. In the early–middle Devonian (416–385 mya), while the predatory placoderms dominated the seas, some sarcopterygians came into freshwater habitats.

In the early Devonian (416–397 mya), the sarcopterygians split into two main lineages — the Coelacanths and the Rhipidistia. The former never left the oceans and their heyday was the late Devonian and Carboniferous, from 385 to 299 mya, as they were more common during those periods than in any other period in the Phanerozoic; coelacanths still live today in the oceans (genus Latimeria).

The Rhipidistians, whose ancestors probably lived in the oceans near the river mouths (estuaries), left the ocean world and migrated into freshwater habitats. They in turn split into two major groups : the lungfish and the tetrapods. The lungfish evolved the first proto-lungs and proto-limbs; they learned in the middle Devonian (397–385 mya) how to live outside a water environment, using their stubby fins (proto-limbs) to walk on land and find new water if their waterhole was depleted, and their lungs to breathe air and get sufficient oxygen. The lungfish's greatest diversity was in the Triassic period; today there are fewer than a dozen genera left.

The first tetrapodomorphs, which included the gigantic rhizodonts, had the same general anatomy as the lungfish, who were their closest kin, but they appear not to have left their water habitat until the later Devonian epoch (385–359 mya), with the appearance of tetrapods (four-legged vertebrates). Tetrapods are the only tetrapodomorphs which survived after the Devonian.

Non-tetrapod sarcopterygians continued until towards the end of Paleozoic era, suffering heavy losses during the Permian-Triassic extinction event (251 mya).

All content from Kiddle encyclopedia articles (including the article images and facts) can be freely used under Attribution-ShareAlike license, unless stated otherwise. Cite this article:
Sarcopterygii Facts for Kids. Kiddle Encyclopedia.