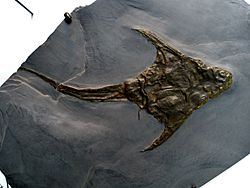 Lunaspis, one of the small early Petalichthyids, from Lower Devonian shales

The Placoderms (Placodermi: Greek = plated skin) were a class of armoured prehistoric fish, which lived from the mid Silurian to the end of the Devonian period. Their head and thorax were covered by armoured plates; the rest of the body was scaled or naked, depending on the species. Placoderms were among the first jawed fish, the Gnathostomata. A 380 million year old fossil of one species is the oldest-known example of live birth.

The placoderms were hugely successful in the Devonian period, which is sometimes called the 'Age of Fish'. In the Upper Devonian, a series of extinction events devastated the marine fauna. As the placoderms were predators, this caused a swift decline in their numbers, and the class was entirely extinct by the end of the Devonian.

The main source of placoderm fossils is the Old Red Sandstone continent. This, in the Devonian, was a united North America and western Europe and the continental shelf areas around it. Fossils from these strata in Scotland were collected since the 18th century, and Louis Agassiz wrote the first survey of fossil fish. A century later, Eric Stensiö showed that placoderms were genuine jawed fish.

Remarkable fossils have more recently been found in the Gogo formation of northern Western Australia. This is a former Upper Devonian reef system, where well-preserved fossils of 25 species have been found. The relationship between the placoderm and other jawed fish is still not clear. Most placoderms were benthic predators, near the bottom of the water column. The largest types, such as Dunkleosteus and Gorgonichthys were 6 metre-long top predators in the middle and upper pelagic zones.

The vast majority of placoderms were predators, many of which lived at or near the substrate. Many, primarily the Arthrodira, were active, nektonic predators that dwelled in the middle to upper portions of the water column. The teeth had well defined pulp cavities and were made of both bone and dentine. However, the tooth and jaw development were not as closely integrated as in modern gnathostomes. These teeth were likely homologous to the teeth of other gnathostomes.

One of the largest known arthrodires, Dunkleosteus terrelli , was 6 m (20 ft) long, and is presumed to have had a large distribution, as its remains have been found in Europe, North America and possibly Morocco. 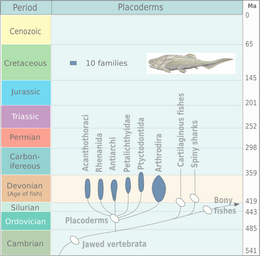 Evolution and extinction of placoderms. The diagram is based on Michael Benton, 2005. 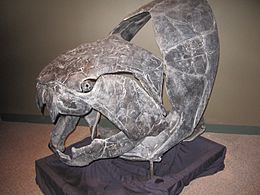 Dunkleosteus, among the first of the vertebrate apex predators, was a giant armoured placoderm predator.

It was thought for a time that placoderms became extinct due to competition from the first bony fish and early sharks, given a combination of the supposed inherent superiority of bony fish and the presumed sluggishness of placoderms. With more accurate summaries of prehistoric organisms, it is now thought that they systematically died out as marine and freshwater ecologies suffered from the environmental catastrophes of the Devonian/Carboniferous extinction events.

Currently, Placodermi are divided into eight recognized orders. There are two further controversial orders: One is the monotypic Stensioellida, containing the enigmatic Stensioella; the other is the equally enigmatic Pseudopetalichthyida. These orders are considered to be basal or primitive groups within Placodermi, though their precise placement within the class remains unsure. Fossils of both are currently known only from the Hunsruck lagerstatten.

All content from Kiddle encyclopedia articles (including the article images and facts) can be freely used under Attribution-ShareAlike license, unless stated otherwise. Cite this article:
Placodermi Facts for Kids. Kiddle Encyclopedia.