The Arthrodires (Arthrodira) are an order of extinct armoured, jawed fishes of the class Placodermi. They flourished in the Devonian period before their sudden extinction, surviving for about 50 million years and living in most marine ecological niches.

Greek for "jointed neck", the arthrodires had movable joints between armour plates surrounding the head and body. The mouth is interesting. As the lower jaw moved down, the head shield moved, allowing a large opening. Lacking distinct teeth, like all placoderms, they used the sharpened edges of a bony plate as a biting surface. The eye sockets are protected by a bony ring, a feature shared by birds and some ichthyosaurs.

Early arthrodires, such as the genus Arctolepis, were well-armoured fishes with flattened bodies. The largest member of this group, Dunkleosteus, was a true superpredator of the latest Devonian period, from 3 to 9 m in length. In contrast, the long-nosed Rolfosteus measured just 15 cm. 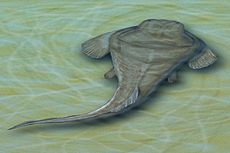 Heterosteus ingens from the middle Devonian of Estonia

All content from Kiddle encyclopedia articles (including the article images and facts) can be freely used under Attribution-ShareAlike license, unless stated otherwise. Cite this article:
Arthrodire Facts for Kids. Kiddle Encyclopedia.