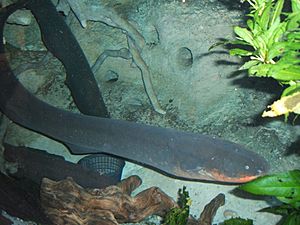 Electric eels are fish capabale of generating an electrical field

Electrogenic fish have a special organ that can generate electricity. This organ is usually called an electric organ. It is usually near the tail of the fish. It is made from specialised muscle or nerve cells. When the organ produces electricity that is released this is called electric organ discharge (or EOD for short).

Based on the strength of the EOD, the electrogenic fish can be classified into two types:

In total, there are 348 known species of electric fish, in about 56 genera. The only known species that lives in salt water are the electric rays, with 23 species.

All content from Kiddle encyclopedia articles (including the article images and facts) can be freely used under Attribution-ShareAlike license, unless stated otherwise. Cite this article:
Electric fish Facts for Kids. Kiddle Encyclopedia.