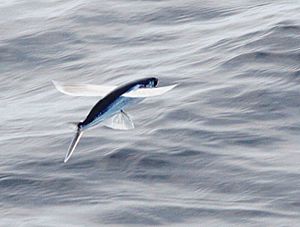 Flying fish are marine oceanic fishes of the family Exocoetidae. They are about 50 species, and they live worldwide in warm waters. They are noted for their ability to glide. They are all small, with a maximum length of about 45 cm (18 inches), and have winglike, rigid fins and an unevenly forked tail.

They do not fly actively: their fins do not flap. What they do is speed towards the surface and keep on going. When they leave the water they glide, sometimes for a surprising distance. It is generally thought to be an adaptation which helps them escape predators.

The earliest known flying fish were in the Middle Triassic. 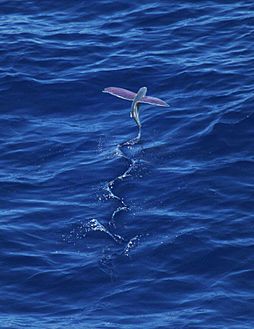 Flying fish live in all of the oceans, particularly in tropical and warm subtropical waters. Their feature is their pectoral fins, which are unusually large, and enable the fish to hide and escape from predators by leaping out of the water and flying through air a few feet above the water's surface. Their flights are typically around 50 meters (160 ft).

To glide upward out of the water, a flying fish moves its tail up to 70 times per second. It then spreads its pectoral fins and tilts them slightly upward to provide lift. At the end of a glide, it folds its pectoral fins to re-enter the sea, or drops its tail into the water to push against the water to lift itself for another glide, possibly changing direction. The curved profile of the "wing" is comparable to the aerodynamic shape of a bird wing. The fish is able to increase its time in the air by flying straight into or at an angle to the direction of updrafts created by a combination of air and ocean currents.

Genus Exocoetus has one pair of fins and a streamlined body to optimize for speed, while Cypselurus has a flattened body and two pairs of fins, which maximize its time in the air. From 1900 to the 1930s, flying fish were studied as possible models used to develop airplanes.

In May 2008, a Japanese television crew (NHK) filmed a flying fish (dubbed "Icarfish") off the coast of Yakushima Island, Japan. The creature spent 45 seconds in flight. The previous record was 42 seconds.

Flying fish can use updrafts at the leading edge of waves to cover distances of at least 400 m (1,300 ft). They can travel at speeds of more than 70 km/h (43 mph). Maximum altitude is 6 m (20 ft) above the surface of the sea. Some accounts have them landing on ships' decks.

Flying fish are commercially fished in Japan, Vietnam, and China by gillnetting, and in Indonesia and India by dipnetting. In Japanese cuisine, the fish is often preserved by drying. The roe of Cheilopogon agoo, or Japanese flying fish, is used to make some types of sushi, and is known as tobiko. It is also a staple in the diet of the Tao people of Orchid Island, Taiwan. Flying fish is part of Barbados' national dish, known as cou-cou and flying fish...

In the Solomon Islands, they are caught while flying, using nets held from outrigger canoes. They are attracted to the light of torches. Fishing is done only when no moonlight is available.

All content from Kiddle encyclopedia articles (including the article images and facts) can be freely used under Attribution-ShareAlike license, unless stated otherwise. Cite this article:
Flying fish Facts for Kids. Kiddle Encyclopedia.