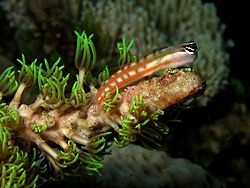 A blenny is a member of a large suborder of teleost fish called the Blennioidei. The suborder has about 833 species in 130 genera.

Blennies are generally small fish. They have long bodies (some almost eel-like), and relatively large eyes and mouths. Their dorsal fins are continuous and long. The pelvic fins have a single embedded spine, and are short and slender. The tail fin is rounded.

The blunt heads of blennies often have whisker-like structures called cirri. As generally benthic fish, blennioids spend much of their time on or near the sea floor.

They are quite similar in form to some gobies.

All content from Kiddle encyclopedia articles (including the article images and facts) can be freely used under Attribution-ShareAlike license, unless stated otherwise. Cite this article:
Blenny Facts for Kids. Kiddle Encyclopedia.