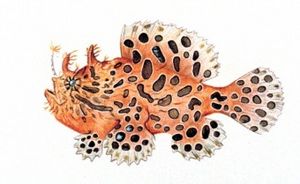 Anglerfish are marine fish that belong to the order Lophiiformes. Anglerfish are noted for having a bait-like appendage in front of their heads, right above their mouths.

The appendage, which resembles a fishing pole, is attached to the end of the dorsal fin's front spine, which is separated from the rest of the fin. Anglerfish light their rod with bioluminescence (their own light) and then wiggle it to mimic a small marine animal. When other creatures come to eat the small marine animal, the anglerfish eats them. They are called anglerfish because they catch fish with bait, just like anglers, who use a rod and line (rather than nets).

One of the families, the Ceratiidae, has an extraordinary mating system where the male actually fuses into the female.

In 2005, near Monterey, California, at 1474 metres depth, an ROV filmed a female ceratioid anglerfish of the genus Oneirodes for 24 minutes. When approached, the fish retreated rapidly, but in 74% of the video footage, it drifted passively, oriented at any angle. When advancing, it swam intermittently at a speed of 0.24 body lengths per second, beating its pectoral fins in-phase. The lethargic behaviour of this ambush predator is suited to the energy-poor environment of the deep sea.

Another in situ observation of three different whipnose anglerfish showed unusual upside-down swimming behavior. Fish were observed floating upside-down completely motionless with the illicium hanging down stiffly in a slight arch in front of the fish. The illicium was hanging over small visible burrows. It was suggested this is an effort to entice prey and an example of low-energy opportunistic foraging and predation. When the ROV approached the fish, they exhibited burst swimming, still upside-down.

The jaw and stomach of the anglerfish can extend to allow it to consume prey up to twice its size. Because of the small amount of food available in the anglerfish's environment this adaptation allows the anglerfish to store food when there is an abundance. 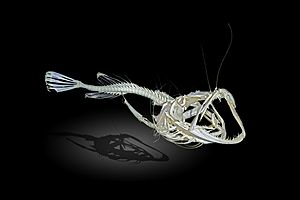 Skeleton of the angler fish, Lophius piscatorius: The first spine of the dorsal fin of the anglerfish acts as a fishing rod with a lure.

The name "anglerfish" derives from the species' characteristic method of predation. Anglerfish typically have at least one long filament sprouting from the middle of their heads, termed the illicium. The illicium is the detached and modified first three spines of the anterior dorsal fin. In most anglerfish species, the longest filament is the first. This first spine protrudes above the fish's eyes and terminates in an irregular growth of flesh (the esca), and can move in all directions. Anglerfish can wiggle the esca to make it resemble a prey animal, which lures the anglerfish's prey close enough for the anglerfish to devour them whole.

Some deep-sea anglerfish of the bathypelagic zone emit light from their esca to attract prey. This bioluminescence is a result of symbiosis with bacteria. The mechanism that ceratioids use to harness them is unknown, but researchers speculate that the bacteria enter the esca through small pores from seawater. Once inside, they multiply until their density is sufficient to produce a bright collective glow.

Because anglerfish are opportunistic foragers, they show a range of preferred prey with fish at the extremes of the size spectrum, whilst showing increased selectivity for certain prey.

A mitochondrial genome phylogenetic study suggested that anglerfishes diversified in a short period of the Lower Cretaceous, between 130 and 100 million years ago.

All content from Kiddle encyclopedia articles (including the article images and facts) can be freely used under Attribution-ShareAlike license, unless stated otherwise. Cite this article:
Anglerfish Facts for Kids. Kiddle Encyclopedia.