Osmosis (/ɒzˈmoʊ.sɪs/) is the spontaneous net movement of solvent molecules through a selectively permeable membrane into a region of higher solute concentration, in the direction that tends to equalize the solute concentrations on the two sides. It may also be used to describe a physical process in which any solvent moves across a selectively permeable membrane (permeable to the solvent, but not the solute) separating two solutions of different concentrations. Osmosis can be made to do work. Osmotic pressure is defined as the external pressure required to be applied so that there is no net movement of solvent across the membrane. Osmotic pressure is a colligative property, meaning that the osmotic pressure depends on the molar concentration of the solute but not on its identity.

Osmosis is a vital process in biological systems, as biological membranes are semipermeable. In general, these membranes are impermeable to large and polar molecules, such as ions, proteins, and polysaccharides, while being permeable to non-polar or hydrophobic molecules like lipids as well as to small molecules like oxygen, carbon dioxide, nitrogen, and nitric oxide. Permeability depends on solubility, charge, or chemistry, as well as solute size. Water molecules travel through the plasma membrane, tonoplast membrane (vacuole) or protoplast by diffusing across the phospholipid bilayer via aquaporins (small transmembrane proteins similar to those responsible for facilitated diffusion and ion channels). Osmosis provides the primary means by which water is transported into and out of cells. The turgor pressure of a cell is largely maintained by osmosis across the cell membrane between the cell interior and its relatively hypotonic environment. 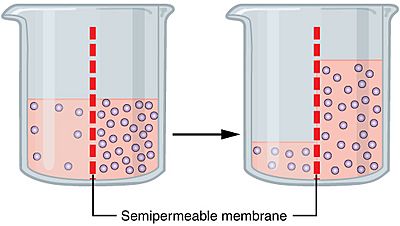 The process of osmosis over a semi-permeable membrane. The blue dots represent particles driving the osmotic gradient 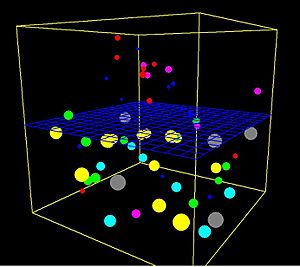 This is a shot from a three dimensional computer simulation of the process of osmosis. The blue mesh is impermeable to the larger balls, but the smaller balls can get through. All the balls are bouncing about

The plasma membrane of a cell is semi-permeable, which means it allowed the entry of certain molecules in or out, it lets small molecules pass through, but blocks larger molecules,. The membrane also has ports or gateways which get certain macromolecules through. This is active transport, which uses energy and is selective. It is outermost covering of the animal cell. It is made up of proteins and lipids. Example:- Exchange of gases like oxygen and carbon dioxide.

All content from Kiddle encyclopedia articles (including the article images and facts) can be freely used under Attribution-ShareAlike license, unless stated otherwise. Cite this article:
Osmosis Facts for Kids. Kiddle Encyclopedia.