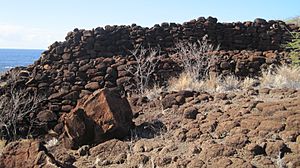 Lanai (or Lānaʻi) is sixth largest of the Hawaiian Islands, in the United States. It is also known as the "Pineapple Island". The island is almost a circle in shape and is 18 miles wide in the longest direction. The land area is 140 sq. miles (367 km2). It is separated from the island of Moloka'i by the Kalohi Channel to the north.

Lana'i was first seen by Europeans on 25 February 1779 by Captain Clerke, with HMS Resolution on the James Cook Pacific Ocean trip. Clerke took command of the ship after Capt. Cook was killed at Kealakekua Bay on February 14, and was leaving the islands for the North Pacific.

In 1922, Jim Dole, the president of Dole Pineapple Company, bought the island of Lana'i. He made a large part of it into the world's largest pineapple plantation.

Tourism on Lana'i started not long ago. That was when the growing of pineapple was slowly coming to an end in the Islands. On Lana'i, you can be with nature and feel the mood of the Hawaiian countryside. Not like nearby O'ahu, the only town (Lana'i City) is small. It has no traffic or shopping centers. Tourists come mainly to relax.

There are three hotels on Lana'i and several golf courses.

All content from Kiddle encyclopedia articles (including the article images and facts) can be freely used under Attribution-ShareAlike license, unless stated otherwise. Cite this article:
Lanai Facts for Kids. Kiddle Encyclopedia.