In April 2009, Lanai City was named one of the most endangered historic sites in the U.S. It is home to an intact plantation town, something not found on any of the other Hawaiian Islands, dating back to the early 1920s. This historic district is threatened by commercial development, which would involve the demolition of a number of historic buildings.

According to the United States Census Bureau, the CDP has a total area of 6.9 square miles (17.9 km2), all land. 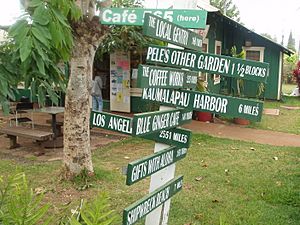 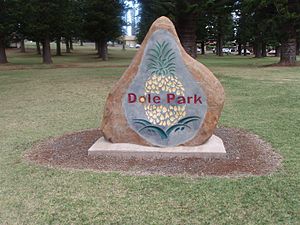 Lanai was once the home of the pineapple plantation of entrepreneur James Drummond Dole, which spanned over 81 square kilometres (20,000 acres) and employed thousands of workers. Dole owned the entire island for a time, and in the 1920s built Lanai City to house and serve the community of workers.

The corporation Castle & Cooke, which owns the Dole Food Company, had intended in 2009 to demolish much of what remains of the historic district, including homes, a laundromat, and a jailhouse—all dating back to the 1920s—in order to build new commercial structures. The development would have included a supermarket described by the National Trust for Historic Preservation as "oversized" and "out-of-scale".

However, in June 2012, Castle & Cooke sold its island possessions (totaling 98% of the island) to billionaire Larry Ellison for an undisclosed sum.

There were 1,148 households out of which 34.9% had children under the age of 18 living with them, 53.7% were married couples living together, 9.9% had a female householder with no husband present, and 30.6% were non-families. 25.7% of all households were made up of individuals and 8.8% had someone living alone who was 65 years of age or older. The average household size was 2.75 and the average family size was 3.33.

All content from Kiddle encyclopedia articles (including the article images and facts) can be freely used under Attribution-ShareAlike license, unless stated otherwise. Cite this article:
Lanai City, Hawaii Facts for Kids. Kiddle Encyclopedia.