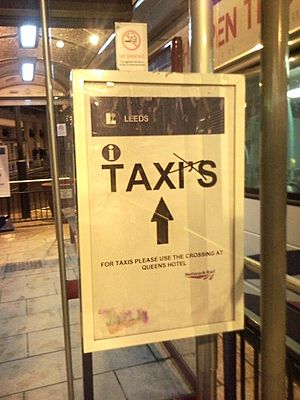 A sign pointing to taxis at Leeds railway station, England, with the extraneous apostrophe crossed out by an unknown copy editor

The apostrophe (’) is a punctuation mark used in writing. It is a diacritic (a mark used with letters).

In English, it has two jobs:

The most common grammatical mistake in written English is to put it's where its is correct. Its: a possessive adjective and pronoun of the personal pronoun it.

It's: a contraction of the verbal phrase It is or It has.

The same applies to yours, theirs and ours because these are also possessive adjectives of personal pronouns.

Apostropes are also used to show something belongs to someone (or something). Again, correct uses can be expanded:

Comes in plurals which don't (do not) need it. Do not put an apostrophe in word ending in s, such as a plural. Put an apostrophe, or 's, at the end of the word instead.

Apostrophes are also used when other words are shortened, as in slang:

This is just a version of the abbreviation function.

All content from Kiddle encyclopedia articles (including the article images and facts) can be freely used under Attribution-ShareAlike license, unless stated otherwise. Cite this article:
Apostrophe Facts for Kids. Kiddle Encyclopedia.