A per ten thousand sign or basis point (often denoted as bp, often pronounced as "bip" or "beep") is (a difference of) one hundredth of a percent or equivalently one ten thousandth. The related concept of a permyriad is literally one part per ten thousand. Figures are commonly quoted in basis points in finance, especially in fixed income markets. 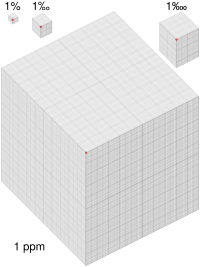 Visualisation of 1%, 1‰, 1‱ and 1 ppm as the fraction of the red cube to its respective block (larger version)

Like percentage points, basis points avoid the ambiguity between relative and absolute discussions about interest rates by dealing only with the absolute change in numeric value of a rate. For example, if a report says there has been a "1% increase" from a 10% interest rate, this could refer to an increase either from 10% to 10.1% (relative, 1% of 10%), or from 10% to 11% (absolute, 1% plus 10%). However, if the report says there has been a "100 basis point increase" from a 10% interest rate, then the interest rate of 10% has increased by 1.00% (the absolute change) to an 11% rate.

It is common practice in the financial industry to use basis points to denote a rate change in a financial instrument, or the difference (spread) between two interest rates, including the yields of fixed-income securities.

Since certain loans and bonds may commonly be quoted in relation to some index or underlying security, they will often be quoted as a spread over (or under) the index. For example, a loan that bears interest of 0.50% per annum above the London Interbank Offered Rate (LIBOR) is said to be 50 basis points over LIBOR, which is commonly expressed as "L+50bps" or simply "L+50".

The term "basis point" has its origins in trading the "basis" or the spread between two interest rates. Since the basis is usually small, these are quoted multiplied up by 10,000, and hence a "full point" movement in the "basis" is a basis point. Contrast with pips in FX forward markets. En lieu of referencing individual basis points for larger percentages, the below terms have been gaining traction and use in the financial industry.

All content from Kiddle encyclopedia articles (including the article images and facts) can be freely used under Attribution-ShareAlike license, unless stated otherwise. Cite this article:
Basis point Facts for Kids. Kiddle Encyclopedia.