A lozenge (◊), often referred to as a diamond, is a form of rhombus. The definition of lozenge is not strictly fixed, and it is sometimes used simply as a synonym (from the French losange) for rhombus. Most often, though, lozenge refers to a thin rhombus—a rhombus with two acute and two obtuse angles, especially one with acute angles of 45°. The lozenge shape is often used in parquetry (with acute angles that are 360°/n with n being an integer higher than 4, because they can be used to form set of tiles of the same shape and size, reusable to cover the plane in various geometric patterns as the result of a tiling process called tessellation in mathematics) and as decoration on ceramics, silverware and textiles. It also features in heraldry and playing cards.

The lozenge motif dates from the Neolithic and Paleolithic period in Eastern Europe and represents a sown field and female fertility. The ancient lozenge pattern often shows up in Diamond vault architecture, in traditional dress patterns of Slavic peoples, and in traditional Ukrainian embroidery. The lozenge pattern also appears extensively in Celtic art, art from the Ottoman Empire, and ancient Phrygian art.

The lozenge symbolism is one of the main female symbols in Berber carpets. Common Berber jewelry from the Aurès Mountains or Kabylie in Algeria also uses this pattern as a female fertility sign.

In 1658, the English philosopher Sir Thomas Browne published The Garden of Cyrus, subtitled The Quincunciall Lozenge, or Network Plantations of the Ancients, in which he outlined the mystical interconnection of art, nature and the universe via the quincunx pattern. He also suggested therein that ancient plantations were laid out in a lozenge pattern.

Lozenges appear as symbols in ancient classic element systems, in amulets, and in religious symbolism. In playing cards, the symbol for the suit of diamonds is a lozenge.

In axiomatic set theory, the lozenge refers to the principles known collectively as the diamond principle. 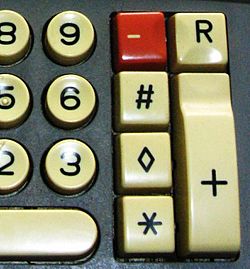 On equipment, especially calculators, the lozenge is used to mark the subtotal key. It is standardized in ISO 7000 as symbol ISO-7000-0650 ("Subtotal"). In a similar fashion, the (square) lozenge (⌑), part of the BCDIC, was often used on tabulation listings to indicate second level totals in banking installations in the 1960s.

During the First World War, the Germans developed Lozenge-Tarnung (lozenge camouflage). This camouflage was made up of colored polygons of four or five colors. The repeating patterns often used irregular four-, five- and six-sided polygons, but some contained regular rhombi or hexagons. Because painting such a pattern was very time consuming, and the paint added considerably to the weight of the aircraft, the pattern was printed on fabric. This pre-printed fabric was used from 1916 until the end of the war, in various forms and colours.

The lozenge in heraldry is a diamond-shaped charge, usually somewhat narrower than it is tall. A mascle is a voided lozenge—that is, a lozenge with a lozenge-shaped hole in the middle—and the rarer rustre is a lozenge containing a circular hole. A field covered in a pattern of lozenges is described as lozengy; a similar field of mascles is masculy.

Cough tablets have taken the name lozenge, based on their original shape. According to the Oxford English Dictionary the first use of this sense was in 1530.

In Finland, the lozenge is associated with salmiak, through Apteekin Salmiakki. Thus, the lozenge is commonly called salmiakkikuvio "salmiak shape". The pattern is often used even if the candy is not actually lozenge-shaped. 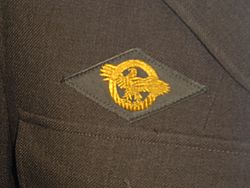 To implement 10 U.S.C 773, the Secretary of the Navy has prescribed the following distinctive mark for wear by members of military societies which are composed entirely of honorably discharged officers and enlisted personnel, or by the instructors and members of duly organized cadet corps.

The distinctive mark will be worn on all outer clothing on the right sleeve, at the point of the shoulder, the upper tip of the diamond to be 1⁄4 inch below the shoulder seam.

The lozenge is used in the Army, Marine Corps, and Air Force on the insignia of their respective first sergeants. It is also used in the cadet programs of Army ROTC, Army and Marine Corps Junior ROTC, and the Civil Air Patrol as rank insignia of cadet officers corresponding to the military pay grades of O-4 to O-6 (Cadet Major, Cadet Lieutenant Colonel, and Cadet Colonel).

The lozenge (technically a mascle) can be used on public roadways in the United States and Canada to mark a specific lane for a particular use. The lane will usually be painted with a lozenge at a regular interval, and signage will be installed to indicate the restrictions on using the lane. This marking is most often used to denote high-occupancy vehicle lanes or bus lanes, with accompanying signage reading "◊ HOV LANE" or "◊ BUS LANE" and giving the requirements for a vehicle to be accepted. Prior to 17 January 2006, lozenges could also be used to mark bicycle-only lanes, often in conjunction with a bicycle icon. In Japan and South Korea, a lozenge marked in white paint on the road indicates an upcoming uncontrolled pedestrian crossing.

In the United Kingdom, lozenges are used on tramway signs. For instance, speed limits are shown as a black lozenge on a white background, containing the speed limit in kilometres per hour.

A hollow lozenge is also used in the signage of waterways to identify a hazard. A cross is placed in the lozenge, dividing it in four, to mark a restricted area.

Several flags feature lozenges, including the Brazilian flag, which contains a yellow lozenge at the center. One official flag of Bavaria is entirely made of blue and white lozenges.

Several emblems feature lozenges, including the Emblem of Uttarakhand, one of the twenty-nine states of India.

All content from Kiddle encyclopedia articles (including the article images and facts) can be freely used under Attribution-ShareAlike license, unless stated otherwise. Cite this article:
Lozenge Facts for Kids. Kiddle Encyclopedia.