The Civil Air Patrol (CAP) is a congressionally chartered, federally supported non-profit corporation that serves as the official civilian auxiliary of the United States Air Force (USAF). CAP is a volunteer organization with an aviation-minded membership that includes people from all backgrounds, lifestyles, and occupations. It performs three congressionally assigned key missions: emergency services, which includes search and rescue (by air and ground) and disaster relief operations; aerospace education for youth and the general public; and cadet programs for teenage youth. In addition, CAP has recently been tasked with homeland security and courier service missions. CAP also performs non-auxiliary missions for various governmental and private agencies, such as local law enforcement and the American Red Cross.

Membership in the organization consists of cadets ranging from 12 to just under 21 years of age, and senior members 18 years of age and up. These two groups each have the opportunity to participate in a wide variety of pursuits, while the older members serve as instructors, supervisors, and operators. All members wear uniforms while performing their duties.

Nationwide, CAP is a major operator of single-engine general aviation aircraft, used in the execution of its various missions, including orientation flights for cadets and the provision of significant emergency services capabilities. Because of these extensive flying opportunities, many CAP members become licensed pilots.

During World War II, CAP was seen as a way to use America's civilian aviation resources to aid the war effort instead of grounding them. The organization assumed many missions including anti-submarine patrol and warfare, border patrols, and courier services. During World War II CAP's coastal patrol flew 24 million miles, found 173 enemy U-boats, attacked 57, hit 10 and sank two, dropping a total of 83 bombs and depth charges throughout the conflict.

During the 113th United States Congress, both the United States Senate and the United States House of Representatives voted to pass a bill that would award the Congressional Gold Medal to the World War II members of the Civil Air Patrol. The medal would be presented "in recognition of their military service and exemplary record during World War II."

The organization condenses these mandates into three core missions, which Civil Air Patrol was chartered with by Congress in 1946: aerospace education, cadet programs and emergency services.

The Civil Air Patrol's cadet program is a traditional military-style cadet program, and is one of the three main missions of the Civil Air Patrol. CAP cadets wear modified versions of United States Air Force uniforms, hold rank and grade, and practice military customs and courtesies. They are required to maintain physical fitness standards, and are tested on their knowledge of leadership and aerospace subjects at each promotion opportunity.

This program is composed of four phases (Learning, Leadership, Command, and Executive) each of which is divided into several achievements. Achievements generally correspond to grade promotions, while phases are tied to levels of responsibility. The Cadet Program operates at a local unit (squadron) level with weekly meetings and weekend activities, but also has national and wing-sponsored events, including week-long and multi-week summer activities and camps.

As cadets progress through the program, they are given additional responsibility for scheduling, teaching, guiding and commanding the other cadets in their units. They also assist their senior staff in executing the Cadet Program. It is not unusual for a cadet officer to command an encampment of hundreds of junior Cadets. Cadets are given many opportunities to lead and to follow; they may hold leadership positions at squadron and wing activities, and are often involved in planning these activities. Cadets may complete paperwork, command other cadets, and teach at weekly meetings and at weekend and summer events.

Cadets under the age of 18 are eligible for ten orientation flights in Civil Air Patrol aircraft, including five glider and airplane flights.

The Civil Air Patrol's core cadet activity is the summer encampment. Typically a seven to ten day event, cadets are put into an intense, military-structured environment with emphasis on physically and mentally demanding tasks, in addition to required classes and activities.

The Region Cadet Leadership Schools (RCLS) provide training to increase knowledge, skills, and attitudes as they pertain to leadership and management. To be eligible to attend, cadets must be serving in, or preparing to enter, cadet leadership positions within their squadron. 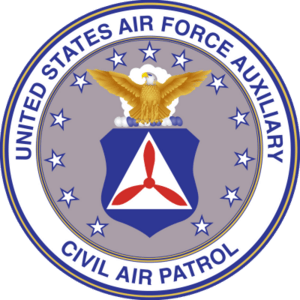 Cadets ascribe to the following oath during their membership:

I pledge to serve faithfully in the Civil Air Patrol Cadet Program, and that I will attend meetings regularly, participate actively in unit activities, obey my officers, wear my uniform properly, and advance my education and training rapidly to prepare myself to be of service to my community, state, and nation.

One requirement for promotion in the Cadet Program is the ability to recite this oath, verbatim, from memory.

The Civil Air Patrol's uniforms provide a distinctive and standard set of uniform items intended to provide a positive public image, build morale, and enhance the professionalism of the organization's membership.

CAP members wear uniforms similar to the U.S. Air Force's uniforms worn with distinctive emblems, insignia and badges to identify them as CAP members; these are categorized as "USAF-style uniforms". Uniforms are categorized in CAP's uniform manual by the environment in which the uniform is to be worn or the work to be accomplished.

The Civil Air Patrol is organized along a military model, with a streamlined and strictly hierarchical chain of command. There are several distinct echelons in this structure: National Headquarters, regions, wings, and squadrons or flights.

All content from Kiddle encyclopedia articles (including the article images and facts) can be freely used under Attribution-ShareAlike license, unless stated otherwise. Cite this article:
Civil Air Patrol Facts for Kids. Kiddle Encyclopedia.