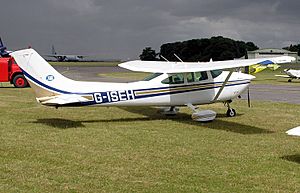 The Cessna 182, marketed under the name Skylane, is a four-seat, single-engine, light airplane. It has the option of adding two child seats, installed in the baggage area.

Introduced in 1956, the 182 has been produced in a number of variants, including a version with retractable landing gear, and is the second most popular Cessna model, after the 172.

All content from Kiddle encyclopedia articles (including the article images and facts) can be freely used under Attribution-ShareAlike license, unless stated otherwise. Cite this article:
Cessna 182 Facts for Kids. Kiddle Encyclopedia.