The symbol # is most commonly known as the number sign, hash, or pound sign. The symbol has historically been used for a wide range of purposes, including the designation of an ordinal number and as a ligatured abbreviation for pounds avoirdupois (having been derived from the now-rare ℔).

Since 2007, widespread usage of the symbol to introduce metadata tags on social media platforms has led to such tags being known as "hashtags" and from that, the symbol itself is sometimes called a "hashtag".

It is graphically similar to several other symbols, including the sharp (♯) from musical notation and the equal-and-parallel symbol (⋕) from mathematics, but is distinguished by its combination of level horizontal strokes and right-tilting vertical strokes. 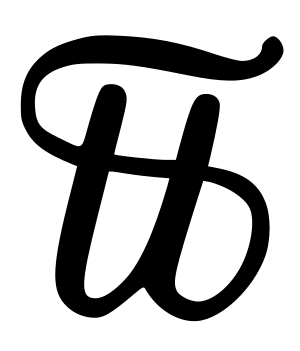 A stylized version of the abbreviation for libra pondo ("pound weight") 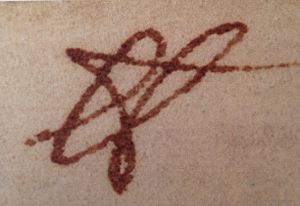 The abbreviation written by Isaac Newton, showing the evolution from ℔ toward #

It is believed that the symbol traces its origins to the symbol ℔, an abbreviation of the Roman term libra pondo, which translates as "pound weight". This abbreviation was printed with a dedicated ligature type, with a horizontal line across, so that the lowercase letter "l" would not be mistaken for the numeral "1". Ultimately, the symbol was reduced for clarity as an overlay of two horizontal strokes "=" across two slash-like strokes "//". Examples of it being used to indicate pounds exist at least as far back as 1850.

The symbol is described as the "number" character in an 1853 treatise on bookkeeping, and its double meaning is described in a bookkeeping text from 1880. The instruction manual of the Blickensderfer model 5 typewriter (c. 1896) appears to refer to the symbol as the "number mark". Some early-20th-century U.S. sources refer to it as the "number sign", although this could also refer to the numero sign. A 1917 manual distinguishes between two uses of the sign: "number (written before a figure)"; and "pounds (written after a figure)".

The use of the phrase "pound sign" to refer to this symbol is found from 1932 in U.S. usage. Before this time, and still outside the United States, the term "pound sign" was used to refer to the pound currency symbol (£) or the pound weight symbol (lb). An alternative theory is that the name "pound sign" arose from the fact that character encodings used the same code for both the number sign and the British pound sign "£". Claims have included ISO 646-GB as well as the Baudot code in the late 19th century. The apparent use of the sign to mean pounds weight in 1850 appears to rule out both of these code sets as the origin, although that same reference admits that the earliest reference in print was a decade after Baudot code.

"Hash sign" is found in South African writings from the late 1960s, and from other non-North-American sources in the 1970s.

The symbol appears to be used primarily in handwritten material, while in the printing business, the numero (№) symbol and barred-lb (℔) are used for "number" and "pounds" respectively.

For mechanical devices, it appeared on the keyboard of the Remington Standard typewriter (c. 1886), but was not used on the keyboards used for typesetting. It appeared in many of the early teleprinter codes and from there was copied to ASCII, which made it available on computers and thus caused many more uses to be found for the character. The symbol was introduced on the bottom right button of touch-tone keypads in 1968, but that button was not extensively used until the advent of large scale voicemail (PBX systems, etc.) in the early 1980s.

The number sign is often used in information technology to highlight a special meaning. It was adopted for use within internet relay chat (IRC) networks circa 1988 to label groups and topics. This usage inspired Chris Messina to propose a similar system to be used on Twitter to tag topics of interest on the microblogging network. Although the hashtag started out most popularly on Twitter as the main social media platform for this use, the use has extended to other social media sites including Instagram, Facebook, Flickr, Tumblr, Diaspora* and Google+.

Mainstream use in the United States is as follows: when it prefixes a number, it is read as "number", as in "a #2 pencil" (indicating "a number-two pencil"). The one exception is with the # key on a phone, which is always referred to as the "pound key" or "pound". Thus instructions to dial an extension such as #77 are always read as "pound seven seven".

The number sign is commonly known as the "pound sign". When the symbol follows a number, the symbol indicates weight in pounds.

In Canada the symbol is called both the "number sign" and the "pound sign". The American company Avaya has an option in their programming to denote Canadian English, which in turn instructs the system to say "number sign" to callers instead of "pound sign".

Usage in the United Kingdom and Ireland

In the United Kingdom and Ireland, it is generally called a hash (probably ultimately from "hatch", referring to cross-hatching, although the exact derivation is disputed). It is not used to denote pounds, either as weight (lb or lbs is used for this) or currency (pounds sterling, for which "£" is used). It is not called the "pound sign"; that term is understood to mean the currency symbol "£" for pound sterling or (formerly) Irish pound.

The use of "#" as an abbreviation for "number" may be understood in Britain and Ireland, where there has been business or educational contact with American usage, but use in print is rare and British typewriters had "£" in place of the American "#". Where Americans might write "Symphony #5", the British and Irish are more likely to write "Symphony No. 5".

To add to the confusion between "£" and "

Other names in English

The symbol has many other names (and uses) in English:

Most scholars believe the word was invented by workers at the Bell Telephone Laboratories by 1968, who needed a word for the symbol on the telephone keypad. Don MacPherson is said to have created the word by combining octo and the last name of Jim Thorpe, an Olympic medalist. Howard Eby and Lauren Asplund claim to have invented the word as a joke in 1964, combining octo with the syllable therp which, because of the "th" digraph, was hard to pronounce in different languages. The Merriam-Webster New Book of Word Histories, 1991, has a long article that is consistent with Doug Kerr's essay, which says "octotherp" was the original spelling, and that the word arose in the 1960s among telephone engineers as a joke. Other hypotheses for the origin of the word include the last name of James Oglethorpe, or using the Old English word for village, thorp, because the symbol looks like a village surrounded by eight fields. The word was popularized within and outside Bell Labs. The first appearance of "octothorp" in a US patent is in a 1973 filing. This patent also refers to the six-pointed asterisk (✻) used on telephone buttons as a "sextile".
Em- and en-spaces (being the length of a letter m and n, respectively) are denoted by a square-shaped em- or en-quad character (⊞ and ⊟, respectively).

All content from Kiddle encyclopedia articles (including the article images and facts) can be freely used under Attribution-ShareAlike license, unless stated otherwise. Cite this article:
Number sign Facts for Kids. Kiddle Encyclopedia.