In music, sharp, or Diese, means higher in pitch. In musical notation, sharp means "higher in pitch by a semitone (half step)," and looks like this:(♯). 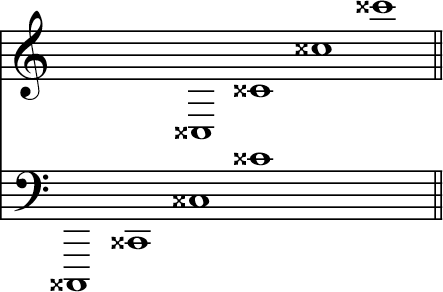 The notes C double sharp on the treble clef and bass clef.

Double sharps also exist; these have the symbol

and raise a note by two semitones, or a whole step. Less often there are half or three-quarter sharps.

Although very rare and used only in modern classical music, a triple sharp (♯

) can sometimes be found. This raises a note by three semitones.

The Circle of fifths tells you how many sharps are in a key signature.

In tuning, sharp can also mean "slightly higher in pitch". If the same note is played on two instruments, and one is slightly higher, it is too sharp compared to the other.

All content from Kiddle encyclopedia articles (including the article images and facts) can be freely used under Attribution-ShareAlike license, unless stated otherwise. Cite this article:
Sharp (music) Facts for Kids. Kiddle Encyclopedia.