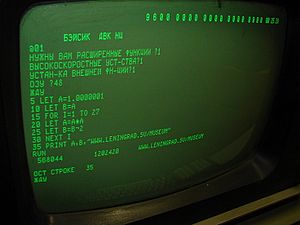 The at-sign (@) is a symbol. It is used in bills, emails and programming. In email, it is used to show a specific domain of an email address. In bills, it used to mean "at a rate of"; for example, "7 widgets @ £2 = £14". In programming, the at-sign has been used in a wide range of programming languages. It was invented by Ray Tomlinson.

The sign is one of several special symbols on the standard English keyboard.

All content from Kiddle encyclopedia articles (including the article images and facts) can be freely used under Attribution-ShareAlike license, unless stated otherwise. Cite this article:
At sign Facts for Kids. Kiddle Encyclopedia.