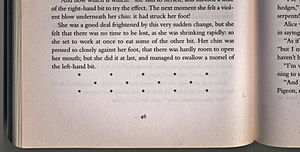 Asterisks used to illustrate a section break in Alice's Adventures in Wonderland.

An asterisk * is a typographic symbol or glyph.

It is so-called because it looks like an image of a star. Computer scientists and mathematicians often speak it as star. Example: the A* search algorithm.

In English, an asterisk is usually five-pointed or six-pointed in typefaces, and six- or eight-pointed when handwritten. It can be used as censorship. It is also used on the internet to correct one's spelling, in which case it appears after the correct word.

All content from Kiddle encyclopedia articles (including the article images and facts) can be freely used under Attribution-ShareAlike license, unless stated otherwise. Cite this article:
Asterisk Facts for Kids. Kiddle Encyclopedia.