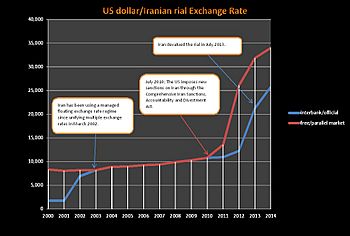 The rial ('IRR) is the name of Iran's currency. It was first introduced in 1798. One toman equals 10 rials.

The toman (تومان tumân) is no longer an official unit of Iranian currency, but Iranians usually quote money and prices of goods in tomans. For this purpose, one toman equals 10 rials.

All content from Kiddle encyclopedia articles (including the article images and facts) can be freely used under Attribution-ShareAlike license, unless stated otherwise. Cite this article:
Iranian rial Facts for Kids. Kiddle Encyclopedia.