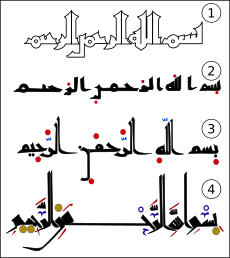 Evolution of early Arabic (9th – 11th century). The Basmala was taken as an example, from kufic Qur’an manuscripts. (1) Early 9th century. script with no dots or diacritic marks [1]; (2) and (3)9th – 10th century under Abbasid dynasty, the Abu al-Aswad's system establish red dots with each arrangement or position indicating a different short vowel. Later, a second black dots system was used to differentiate between letters like "fāʼ" and "qāf" [2] [3]; (4) 11th century, In Al Farāhídi's system (system we know today) dots were changed into shapes resembling the letters to transcribe the corresponding long vowels [4].

A diacritic (for example, an acute accent) is a mark put above, below, through or on a letter. The word comes from the Greek word διακριτικός (transl. diakritikós = 'distinguishing'). Usually, it affects the way the word is said (pronounced). Most diacritics concern pronunciation because most alphabets do not describe the sounds of words exactly. Diacritics are rare in English, but common in many other languages.

English orthography often uses digraphs (like "ph", "sh", "oo", and "ea") rather than diacritics to show more sounds that can be shown with single letters of the Latin alphabet. Unlike other systems (such as Spanish) where the spelling shows how to say the words, English pronunciation is so varied that diacritics alone would not make it phonetic. By using digraphs we show sounds which are not shown by single letters.

Diacritics are not used much in modern English. Two types of diacritics have become part of everyday English: the dot above the "i" or "j" and the apostrophe. But they are no longer commonly thought of as being diacritical. The apostrophe is used to show missing letters (elision, it's to replace it is) and show possession (as in Mike's car).

In most other cases, use of diacritics for native English words is considered old-fashioned (not used anymore). Diaereses (similar to umlauts) can be used on words where two vowels next to each other are pronounced separately like noöne, reëstablished, or coöperate (two vowels pronounced together are a diphthong). This method is still used sometimes. Diacritics are sometimes used in loanwords (words of foreign origin), such as naïve, entrée, pâté, façade.

A different principle is illustrated by the circumflex î. This usually shows the loss of letter: e.g. maistre (Middle French) > maître (modern French). Thus its function is historical. Also, less often, the circumflex is used to distinguish between homophones. These are words spelt the same, but with different meanings. Example: sur = on, but sûr = safe. In those cases the pronunciation of the two words may be different.

The tilde ñ is pronounced something like ny. It counts as a separate letter in their dictionaries, coming after n.

The double L is pronounced as our Y and LL is in Spanish dictionaries in its own section, after the single L section.

The umlaut ü in German is pronounced ue, and is less used in modern German. Historical name-spellings should always keep the umlaut if it was used for that name.

The Scandinavian languages treat the characters with diacritics ä, ö and å as new and separate letters of the alphabet, and sort them after z. Usually ä is sorted as equal to æ (ash) and ö is sorted as equal to ø (o-slash). Also, aa, when used as an alternative spelling to å, is sorted as such. Other letters modified by diacritics are treated as variants of the underlying letter, with the exception that ü is frequently sorted as y.

Gen. 1:9 And God said, "Let the waters be collected".
Letters in black, niqqud in red, cantillation in blue

The diacritics in Hebrew and Arabic are not always used, however.

All content from Kiddle encyclopedia articles (including the article images and facts) can be freely used under Attribution-ShareAlike license, unless stated otherwise. Cite this article:
Diacritic Facts for Kids. Kiddle Encyclopedia.