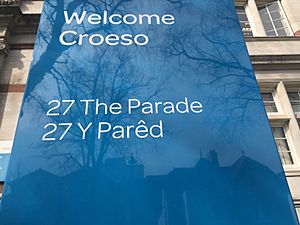 Bilingual sign showing the use of the circumflex in Welsh as an indicator of length and stress: parêd [paˈreːd] "parade", as opposed to pared [ˈparɛd] "partition wall".

The circumflex is a diacritic (accent) used in French and a few other languages. It is like a little hat on top of a vowel. Originally, it was an acute accent and a grave accent put together.

In French, the circumflex usually shows the loss of letter, usually the loss of the letter s. Example: maistre (Middle French) > maître (modern French). Here its function is historical.

Also, less often, the circumflex is used to distinguish between homophones. These are words spelt the same, but with different meanings. Example: sur = on, but sûr = safe or certain. In those cases the pronunciation of the two words may be different.

All content from Kiddle encyclopedia articles (including the article images and facts) can be freely used under Attribution-ShareAlike license, unless stated otherwise. Cite this article:
Circumflex Facts for Kids. Kiddle Encyclopedia.