Kids Encyclopedia Facts
Not to be confused with Ş (S-cedilla). 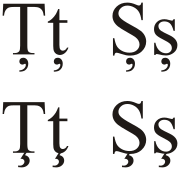 Appearance of comma (upper row) and cedilla (lower row) in the Times New Roman font. Note that the cedilla is placed higher than the comma.

S-comma (majuscule: Ș, minuscule: ș) is a letter which is part of the Romanian alphabet, used to represent the sound the voiceless postalveolar fricative (like sh in shoe).

S "half moon" proposed as a letter in the Buda Lexicon.

S-cedilla, T-cedilla and a cedilla illustrated with a comma in Ortografia limbei române published by the Romanian Academy in 1895.

S-comma was not initially supported in early Unicode versions, nor in the predecessors like ISO/IEC 8859-2 and Windows-1250. Instead, Ş (S-cedilla), a character available since Unicode 1.1.0 (1993), was used for digital texts written in Romanian. In some contexts, like with low-resolution screens and printouts, the visual distinction between ș and ş is minimal. In 1999, at the request of the Romanian Standardization Association, S-comma was introduced in Unicode 3.0. Nevertheless, encoding for the S-comma was not supported in retail versions of Microsoft Windows XP, but a later European Union Expansion Font Update provided the feature. While digital accessibility to S-comma has since improved, both characters continue to be used interchangeably in various contexts like publishing.

Use of the comma with the letter S

All content from Kiddle encyclopedia articles (including the article images and facts) can be freely used under Attribution-ShareAlike license, unless stated otherwise. Cite this article:
S-comma Facts for Kids. Kiddle Encyclopedia.