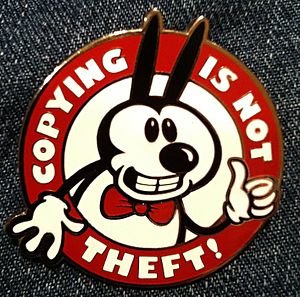 "Copying is not theft!" badge with a character resembling Mickey Mouse in reference to the in popular culture rationale behind the Sonny Bono Copyright Term Extension Act of 1998

Intellectual property (IP) refers to the ownership of an idea or design by the person who came up with it. It is a term used in property law. It gives a person certain exclusive rights to a distinct type of creative design, meaning that nobody else can copy or reuse that creation without the owner's permission. It can be applied to musical, literary and artistic works, discoveries and inventions. Common types of intellectual property rights include copyrights, trademarks, patents, industrial design rights and trade secrets.

The stated reason for most intellectual property laws is to encourage progress. To give legal ownership of an idea to an inventor is seen as an incentive for those people to make their inventions available to the public. It is designed to secure the full value of a work for its creator, to make it into another type of 'real' property.

All content from Kiddle encyclopedia articles (including the article images and facts) can be freely used under Attribution-ShareAlike license, unless stated otherwise. Cite this article:
Intellectual property Facts for Kids. Kiddle Encyclopedia.